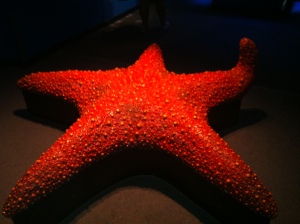 So, for whatever reason, I’ve been feeling like putting some of my writing up, so here is a poem I wrote a few years ago, followed by the story of how it came to be.

I Am Not Your Touch Tank Sea Star

When I’m a sea star
I hold the sea’s mystery in my purple
Yet I live at the tips of my spines
Erected like walls to protect
My soft center from being hurt or feeling
The hurt I’ve already been.
As I scavenge along the bottom
For bull kelp and sea lettuce
I cling to any steady surface
With tube feel like a miser who knows
I don’t deserve the water
And I don’t let anyone touch me

Sometimes I’m a sea cucumber
Spikes only ward my demons off for show
I let them go tender
And as I lay exposed
My past creeps up behind me
Slithering inside my open sores
Carrying their torches of truth
I feel them settle in my gut
So I twist it around them, bunch it up
With a hurl I eviscerate my organs
And scramble to grow new insides

Once I was an octopus
Used eight arms to lift the top of the holding tank
Squeezed out, dropped to the floor and crawled
Through the crack under the door
Famished on the sand, inching forward
Telling myself I will not let them
Make me let myself die
If I can give me a little slack and a lot of love
I might make it
Back to the deeper seas I knew before captivity
Where they can’t coax me back
To put me in the big tank, captive
For their audience
I am free

On a blue moon I’m a blue dolphin
On waves with deeper frequency
Intelligence unfocused on rational thought
Feel no shame for stranding myself
To help a member of my pod in need
Sensed out with echolocation
Weathered harsh, howling storms
By surrendering to their windblown frenzy
I know the patterns of Earth’s turning
I have been to blue depths

Today I just want to be
Myself
Deep down
I am
The sea.

I wrote this in the summer of 2003 so it’s several years old now. That spring I worked OEE (Outdoor Environmental Education) on Orcas Island. During that season, I had to teach challenge and science classes to groups of kids, mostly in fifth or sixth grade (but there were a few groups younger and older). Some of the science classes included pond ecology, forest ecology, the water cycle, microforest, “Super Salmon” and most notably related to this post, marine invertebrates and marine mammals.

I had a rough time for a lot of reasons, one being that I was not so familiar with this material before I worked there. I had taken some basic environmental science class but nothing in depth on marine life. And a lot of these creatures we were looking at and studying were soooo small I could barely see them, much less make distinctions and identifications. So I was learning as I was teaching, and learning by teaching. At the same time I was going through some intense personal stuff, and felt stressed out always having to be so “on” for the kids. There were a lot of fourteen-hour days and I remember walking around, going from class to class at different locations around camp with this poem in my head, the words coming together around my own personal struggle and what I was learning about marine life.

And just FYI the octopus part is based on a real story that happened that spring. An octopus really did escape a holding tank by somehow lifting the lid and slithering out. I can’t remember all the details, I want to say it died trying to get back to the water, but am just not sure if I’m recalling that accurately. I remember feeling so inspired by that octopus’ instinct for freedom.

All in all, I am not absolutely satisfied with the poem – to me it feels too prose-y. And that is always my issue. I don’t think poetry comes naturally to me. I don’t read a lot of it, and blasphemous as this may sound, I don’t like much of it. When I find a poem or a poet I like, it is a big deal. In fact, I honestly prefer some of the poetry written by friends and people I know (in a blows everything else out of the water sort of way) to most of what I’d find in anthologies, literary journals or acclaimed chapbooks. A huge percent of it just doesn’t speak to me. I like the idea of poets and poetry, and even the word poetry, more than I actually like most poetry. All this to say, I am well aware that poetry is not my forte.

I want to say this too, for anyone who isn’t familiar, the title and the last line are a play on a song by Audioslave called “I Am the Highway.” It’s on their first, self-titled album and though I was not a huge fan of that album, there were a handful of songs I really loved, and this one was particularly fitting for my life at the time, especially the winter immediately before that spring working OEE on Orcas Island. I had moved out of my parents’ house, which felt more like an escape than a moving out, and was struggling through life in Seattle, and this song just embodied a lot of my sentiments at the time. No wonder some of the rhythm and the music seeped into my own attempt at poetry.

Currently Listening:
“I Am the Highway” – Audioslave – well, duh. It relates to the post so I put it on (and actually realized I had never transferred this album to my computer, though I did have a few songs). Crazy how you can go so many years without hearing a song and how seamlessly the words come back to mind.

Pearls and swine, bereft of me
Long and weary, my road has been
I was lost in the cities
Alone in the hills
No sorrow or pity
For leaving, I feel

Friends and liars don’t wait for me
Cuz I’ll get on all by myself
I put millions of miles
Under my heels
And still too close
To you, I feel