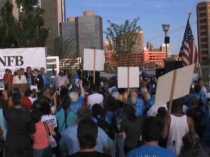 The first few days of convention are filled with Division meetings, meaning that instead of meeting as a huge assembly (that will come later), at any given time there are several different special interest groups meeting at once. Parents of blind children, blind parents, seniors, diabetics, piano tuners, ham radio operators, lawyers, antique car enthusiasts, crafters, technology buffs, they all have divisions and meetings. There are also meetings for new members, presentations from different schools for the blind, presentations by guide dog schools where you can “test drive” a guide dog, meetings on how to build up local chapters, demos of new adaptive technology, plays put on where the directors and actors are all blind, salsa dance classes taught, attended and deejayed by blind folks, a mock trial put on by blind lawyers and the list goes on. We take frequent breaks in our room because the stories are true, it is a little overwhelming.

There’s also the Independence Market, a technology and adaptive aid exhibit hall in one of the hotel ballrooms and it is something to behold. Along every inch of every wall, and through several makeshift hallways in the center, there are endless tables and displays, each draped in a different company logo. Most of the booths feature technology items—braille notetakers, digital book readers, screen-reading software packages, handheld iPhone-shaped gadgets that act as magnifiers and also play music and videos. Apple is there with the real iPhones, which are accessible right out of the box, the new technology rage among the blind. There are several flavors of talking medical supplies, every size and shape of magnifier and audible GPS devices. There are random non-techie booths, like the FBI doing job recruiting, and a booth selling Braille Bibles brailled in over 27 languages, including several Indian ones like Hindi and Malayalam.

I go by myself to the science and engineering division meeting, where I meet people who are interning for NASA and a totally blind girl who’s majoring in biochemistry who guesses people’s heights (while they are sitting down) by voice. Even though I’m slightly slouching, she guesses my 5’7” spot on. The NASA thing gets me. When I was younger, I thought I wanted to do something like that when I grew up, but back then my visual impairment would have been a deal-breaker. That’s one of the great things about a convention like this: you get to really see that things are changing, that blind people are making inroads and finding success in all kinds of careers and hobbies.

This is an excerpt from the essay “Blind Conventions,” a recounting of my first experience at a blind convention held by the NFB. This piece is apropos because I’m currently en route to my 2nd NFB convention. I’m sure there will be lots of fun crazy, funny, weird and inspiring stories that I’ll be tweeting along the way! These conventions are always surreal.

You can check out other Friday Samples here. And don’t forget you can always check out Published and Older Works for more samples.

Top 10 of Anything and Everything
Soul of a Gypsy......Welcome to my Journey