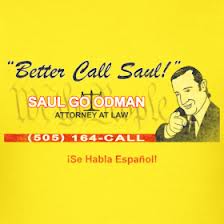 Oh Badger, Badger, Badger. You shoulda listened to your gut on this one. You knew that guy was a cop and you sold to him anyway. Smooth move.

In the previous episode, Walt pushed for expanding their territory, and a price hike, and in this one, there are some consequences. Actually, there have been a lot of consequences all season, but it’s funny how Walt doesn’t see it. Or sees it and wants to just push on anyway. He’s not exactly proceeding with caution. Skinny Pete got held up and in response Walt pushes Jesse to get into the whole mess deeper. Gretchen called Walt on his bullshit and he gets all Heisenberg and says “Fuck you.” Walt and Jesse got kidnapped by Tuco and Walt gets naked in a convenience store to make his cover-up of his disappearance more believable and talks to Jesse, while still at the hospital, about starting up cooking again. Jesse got all depressed after his dealings with The Spooges and Walt sees it as an opportunity to exploit their newfound power and expand the business. Walt’s family life is all a mess and he just keeps on lying and disappearing.

I guess my point is that at any point where it seems a person might decide to proceed with caution and dial things back, Walt does the opposite. He is a man on a mission and doesn’t see any of these things as warning signs. He wants that money counting thing to be going around the clock.

But Badger getting busted could be really bad. Jesse says he’s too loyal to roll, but how long will that last?

One of my favorite pieces of dialogue in this episode:Badger: I thought we were gonna hang out.
Cop: We are hanging out.

So Jesse calls Saul and Walt pretends to be Badger’s uncle. And oh man, Saul’s waiting room is maybe more depressing than The Spooges’ apartment. And Saul Goodman. Wow. What a great character. After a season and a half, there is a third person in this criminal enterprise. And Walt and Jesse are at the point where they could really use some help. They’re starting to make a lot of money, and of course, with that comes all kinds of issues. How can they keep spending it without getting caught? The more they expand, the more chances for trouble.

Although, of course, they have to spend a small fortune getting themselves out of this mess, giving someone other than Walt for Badger to finger as Heisenberg. They keep making all this money and netting close to nothing.

Hank is back and his PTSD seems to be worse this time around, since what he experienced in Juarez with the El Paso DEA guys must only compound the effects of his shootout with Tuco. Now he’s acting a bit like Jesse in the last episode (minus all the bong hits Jesse took), not getting out of bed. It takes one of Walt’s pep talks to get him going again, and back on the Heisenberg trail. Walt had a little reprieve in the previous episodes, when Hank was focused elsewhere, but now he’s back on it. Will the whole Jimmy In ‘n Out thing satisfy him that he’s caught Heisenberg and keep him off the trail? And if so, for how long?

When Saul talks to the cops, you get the feeling that Saul himself is acting, not just Bob Odenkirk acting at being Saul, but Saul the character putting on a charade, an act.

I love that Jesse and Walt wear those same ridiculous masks they did when they robbed the methylamine from Southwest Aniline. What a great callback. That whole sequence where they kidnap Saul and bring him to that shallow grave is fantastic. And once again, a scene that is dark in material and so beautiful in landscape. It’s desolate, sure, but just look at that horizon. This scene also tells us a lot about Saul and who he is, this criminal lawyer. He’s obviously gotten himself in some trouble before, maybe regularly.

And what is this with Walt seeming to consider (at a few different times) the idea of killing Badger? There’s something so eerily pragmatic in that, like taking the human element out of the equation entirely. Lucky for Badger, Jesse is too loyal to turn on him like that. Badger’s his friend, and Saul’s idea is out of the question.

So Saul comes up with another solution. But of course, there’s some trouble when Badger and Jimmy try to play it out and Badger almost ends up, for the second time, selling to the wrong guy. Walt thinks fast to come up with a solution, sort of using Hank’s recent depression as an excuse to go over there and start asking Hank how he’s doing. Walt is sharpening his skills at scrappy resourcefulness in a pinch.

Walt and Skyler appear to be in a slightly better place with each other than they have all season. There’s only a brief scene with them, but it’s fairly pleasant, and in it they almost seem like any typical couple. This seemed immediately realistic to me.

As I mentioned in the post on “Down,” I was once in a relationship that reminds me a bit of Walt and Skyler, full of disappearing and lying and just general what the fuck is going on with this person, and at the time when it all started, I was working from home a lot, doing a lot of freelance editing. And that only made things worse. Plus I was home to know he was disappearing and shutting me out. Then I went back to work at an old job in a kitchen, and once I started working outside the apartment, things got a little better in a strange way. There was just this other thing, work, to distract me, to occupy my thoughts, a place to interact with other people and get some perspective, and a way to literally not be home with the guy and the situation all the time. It also allowed me to start seeing clearly how fucked up things were, that change of location and perspective, so, hmmm.

Still, it made a lot of sense to me that now that Skyler’s getting out of the house more, and now that she has a job to occupy her, the tension between her and Walt has chilled out some.

Meanwhile, Jesse and Jane are heating up! In this episode, we learn that Jane’s in recovery. Oh boy, how’s that going to play out for pothead methhead Jesse? You can see in how Jesse reacts to her announcement that he’s really intent on trying to keep it cool with her. He immediately adjusts from hey let’s smoke up right now to I don’t really blaze that much anymore. But my favorite part of that whole scene is when Jesse asks, as Jane’s getting dressed so abruptly,”We cool?”

Next Episode: 4 Days Out