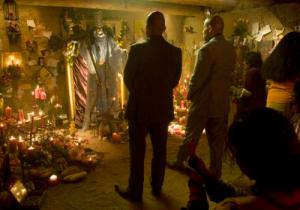 New season, new look to the teaser. Last season was all black and white with the pink bear as the only color. This year’s opener is saturated in color. They must be using a yellow filter to get the sky and landscape to look like that.

I like that this starts out visually different than the year before, because this season has a different feel, some different themes, a change in tone. And this time, we aren’t left hanging for episodes to see any elaboration on the teaser. This time it takes less than an episode. Two super scary dudes are crossing the border and if the ceremony is any indication, they are in search of Walter White.

I actually really love these characters, The Cousins as they’ll come to be called. Scary and deadly quiet but strangely elegant.

Walter White should probably never be asked to give any sort of speech in front of anyone, ever. He always comes across so detached and almost disturbing and out of sorts. Though I have to say that Walt’s “I was just moved” line is hilarious. He’s got some good ones this episode. Out of touch as his speech may be, it lets us in on where Walt’s head is at in the aftermath of the plane crash, especially now that he knows the plane crash was caused by Jane’s father, the man whose daughter he stood by watching and doing nothing as she choked to death on her own vomit, the man who he talked to in the bar earlier that night, the man who said the thing that convinced Walt to go to Jesse’s apartment again that night in the first place. 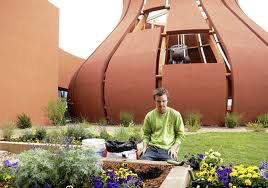 I think the theme of this season has something to do with accepting yourself as you are, or figuring that out and “I’m the bad guy.” Walt and Jesse are dealing with these thoughts and issues in such radically different ways, and their positions at the outset carry them through the season.

Jesse is done using and he’s looking things straight in the eye. He accepts that he’s the bad guy. Maybe a little too much. He did some uncool things, like doing heroin with Jane, and maybe indirectly he said the things that tempted her to start using again, but Jesse seems to be accepting more blame than is really his to bear. Where will this lead him. What will a drug-free Jesse be like?

Walt is going in the opposite direction. His weird speech in the auditorium shows that, after only a week, he is deep in rationalization about the plane crash. He’s steeped in facts about how this wasn’t the worst plane crash, but it’s a little too soon. Later, when he’s talking to Jesse, Walt’s rationalizations are even clearer. He comes up with all kinds of things and institutions and technology to blame. Best line in there? “I blame the government.” Walt, though his involvement was indirect, has a lot more to blame himself for, which is probably why he’s grasping at these fairly transparent rationalizations and pointing the finger at anyone but himself. But he does feel guilty. After all, he does set his drug money on fire. For a split second or so, but still. Walt is trying to be good again. 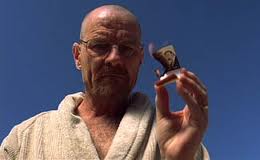 Walt says he’s out of the meth game. We have heard this before. Another perfect line of dialogue is Walt to Gus, “I’m not a criminal…no offense to people who are.” Too funny. Walt had a picture of himself (somewhat inflated) as this kingpin badass, but he also had a picture of himself as this upstanding citizen. You can see this in the way he distances himself from what he’s cooking, treating users with derision, talking about the operation as if it’s a legitimate business, always saying no more violence like what he’s doing is clean and tidy. I think he has these two pictures of himself simultaneously, and in the upstanding citizen one, he can distance himself enough to think that he’s not really a criminal. Boy is Gus’s offer tempting though. Three million dollars.

In the finale last season, Walt was on the verge of telling Skyler everything, but now he’s back to his old tricks, waiting for her to speak first so he can maneuver around what she knows and keep from revealing anything she doesn’t. And when she says, sort of as a question, testing it out, “You’re a drug dealer,” he protests with all this “What? Why would you say that?” but this only lasts for a minute or two before he finally admits to her, “methamphetamine.” Apparently that was a lot worse than what she had thought. She thought he was selling pot with Jesse, but this isn’t the male version of Weeds.

This is as good a time as any to take a moment here and talk about the choice of meth as the drug in Breaking Bad. That was Vince Gilligan’s original idea–it doesn’t seem that any other drug would have been at the center of this show–but there are some deliberate implications of that choice. Let’s say it was pot, like in Weeds. That just wouldn’t have the same feel.  It wouldn’t have the same danger, or darkness. The feel would just be too…mellow. LSD or any other hallucinogens would be too dreamy and colorful and potential to be useful in therapy and again sorta mellow. Heroin would be too rock star dope dreams. You can play a song like “Enchanted” for Jesse’s first encounter with heroin. But the “tone” of meth is different. There’s something bleak and dark and hopeless in meth. It fits the tone of the show. I don’t think any other drug would give Breaking Bad the same feel.

And Walt, as always, stands by his love for his family, for Skyler. Says he would do anything for her. Walter White is such a strange mix of elements. He’s complicated for sure. In a way he really is both of these pictures of himself, but neither one as fully as he believes. He’s Mr. Chips and Scarface but at this point, not doing a great job at either persona. Maybe the balance will tip this season.

There are some great pauses and lingerings in this episode. One is when Walt brings Jesse to his place (and of course tells Jesse that his split with Skyler is “strictly temporary”) and they’re both standing inside the door so long it’s awkward. Perfect for what they’ve been through, the different ways they’re both dealing with guilt, which does make them uncomfortable together. They’re really on separate trajectories.

The best lingering is on Walt making his sandwich. In fact this one’s so long that it’s overlaid with Principal Carmen’s words at the assembly. This is a great way to show that Walt’s not fully present at the assembly. It also conveys his loneliness now that he’s alienated from his family. It reminds me of how, every time you move to a new place, especially if you’re living there alone, the hours just seem to drag out. Walt making the sandwich is a great callback to Season One and Krazy-8. And earlier, that first shot of Walt in the episode, when he’s sitting by the pool, is a great callback to the pilot.

And don’t you know? Cool guys don’t look at explosions!