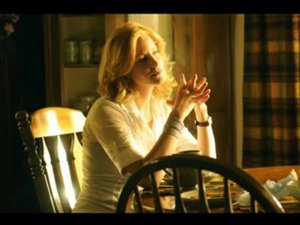 “It’s like Michelangelo won’t paint.” Saul on Walt staying out of the meth game.

And Walt, so far, is still out. And being out no longer sits so well with Walter White. The last time Walt declared he was out, to Jesse after getting his remission diagnosis, he got all weird and aggro at the party and was generally bored and in need of distraction (all that fixing up different stuff in the house) until he got his Heisenberg back by telling those guys to stay out of his territory. This time, after turning down Gus’s verrrrry tempting offer, he gets all aggro and irrational with a cop. Now that Walt has somewhat become this Heisenberg guy, he’s a little lost when he gives that up.

How long can it really last?

Well, hmmm. Walt is at a new place, a place we haven’t seen him before, at least not for more than a few minutes. And it’s a complex place. There’s guilt in there–that’s why he keeps the karmic eyeball around and brings it with him when he goes back to his house, that’s why he’s not putting up more of a fight with Skyler, that’s why he brings Jr back right away instead of encouraging him to stay. I think that guilt is even partly behind his outburst at the cop about Wayfarer which he indirectly probably feels some responsibility for. His guilt level and amount of rationalization could probably show scientific correlation at this point in the story. He feels guilty so he is working harder than ever to convince himself that he’s not really at fault for anything.

Walt’s also having the first real loss since he broke bad. There have been all kinds of consequences and close calls, like almost dying in the desert, getting kidnapped by Tuco and all that, but Walt’s always managed to escape without any permanent damage. He may have successively lost pieces of his soul but I don’t know that he felt that in any direct way. But with Skyler filing for divorce, he does. He’s lost his family, the whole reason he started doing this in the first place. It’s good timing for Walt to finally suffer a real loss that he can truly feel.

To expand on something I mentioned last time, this is really a season where the characters grapple with who they are. I think several different characters are asking themselves, in different ways, am I the bad guy? Walt doesn’t really want to examine this question too closely. As he says to Saul, “I can’t be the bad guy.” Which sorta implies he’s afraid that he is.

In general, I don’t think people think they’re the bad guy. Even when other people do. Even when it’s sort of obvious. Even when we know better. We all justify our behavior to ourselves. It wouldn’t take much digging for Walt to see all the ways in which he has been the bad guy. But now, he doesn’t want to dig. He wants to put on this good guy act. The old Walt who never cooked meth. He’s not even all that concerned about Skyler going to the police.

And yet, as much as he wants to not be the bad guy, can’t you just feel what he must be thinking when he overhears Hank talking to the officer about Walt’s job, cancer diagnosis, wife kicking him out. Hank is painting him as the ultimate Old Walt, and you can just feel how much Walt wants to start yelling, like he did at the cop, but about how they don’t even know who it is they’re talking about.

These two sides of Walt are really at war.

This is a really great turn for the show to take. If Walt didn’t feel some guilt, or question what he’s doing enough to stop cooking, his character would be too flat, would’ve changed too fast to be believable, and he would’ve lost too much of his humanity too soon. Walt’s taken small pauses before, or been forced to stop for periods and reset, but the decision to start again or not gets a little more complicated each time. Walt is such a compelling main character because he himself is so complicated and has these different sides and personalities, some more hidden than others, you know, like the real complexity of a real person. Which isn’t often portrayed in all its layers on TV. 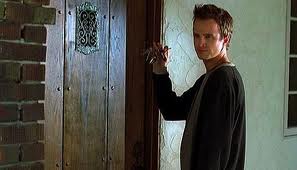 Jesse is in a different situation. He accepts who he is. He accepts being the bad guy. There is something so straightforward and direct about Jesse now. But there’s also something missing. Jesse seems almost unaffected by anything, disengaged in conversations, straight to the point and nothing else. With Saul, with his parents. It makes sense, him having lost Jane and all. And then getting clean and going through rehab on top of all that.

When Jesse buys the house from his parents, he’s so matter-of-fact. Not angry. Not gloating. Just straight up. This is yet another classic BrBa situation with many sides. It’s soooo satisfying to watch Jesse get the house back. You just want to pump your fist and yell “Hell yeah, take that bitches!” or something of the sort. For all the good reason his parents may have had in kicking him out in the last season, the feeling is always that the house was Jesse’s, that his Aunt Ginny really wanted him to have it.

On the other hand, it is sort of a dick move. He screws his parents out of the real asking price of the house that they’ve renovated. And let’s not forget that it’s because of Jesse and Walt that they had to fumigate the basement and fix the upstairs bathroom. So it’s pretty unfair to them what Jesse (via Saul) does. But then again, his parents were being deceitful (and illegal) by trying to sell the house while covering up the fact of the meth lab in the basement and that’s pretty shitty. Then on the other hand, it’s because of Jesse that there was anything to lie about in their house paperwork. And Saul sorta plays their protectiveness of Jesse against them by insinuating that he could start a criminal investigation into the meth lab. But then, his parents were kind of assholes to Jesse in this episode. His dad especially. He’s just so cold, the way he won’t show Jesse the house and clearly doesn’t want Jesse coming over for dinner, and the way they both openly dread it when they see him coming. You just want to yell at them that Jesse’s drug-free now, for real, and maybe they should give him a chance.

Can the parent-child relationship ever come back from this? Jesse got his house back, but screwed them over in the process. They’re probably not completely oblivious to how he might’ve come about the money for it.

Skyler is also dealing with the questions of who’s the bad guy. Sadly for her, Walt is not the only man in her life doing some illegal cooking. Ted is cooking the books, which she’s known for awhile now but now it’s even more obvious. And this time she asks him what he’d say to his daughters if they found out. Of course, she really wants to ask Walt, but with Ted it’s easier. He’s not her husband or the father of her children. She’s not entwined with him in the same way. And what Ted’s doing isn’t the same kind of bad as what Walt’s doing. So she asks Ted, and Ted says the same thing Walt would. That he’s doing it for his family. Like I said, everyone is right in their own mind. Everyone’s the good guy.

Skyler asking Ted about his cooking the books seems like the tiniest of tiny thawing between her and Walt. If she didn’t care, didn’t want to understand on some level, she wouldn’t have asked Ted as a proxy for Walt. And look at what she does with Ted. She tells him basically that if he’s going to keep cooking the books, he has to do it better. She doesn’t turn him in. She doesn’t quit working for Beneke. She doesn’t even refuse to help him exactly. This is a bit of Skyler…well not exactly breaking bad but by association, yeah. This episode makes a turn for her.

The thawing of her icy feelings towards Walt is really tiny. Not enough to let him in (pizza on the roof!) or take back her divorce request, but it’s still a slight turn. Something.This is not going to be an easy process. 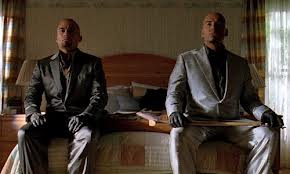 Hank knows a bit about The Cousins coming up from Mexico. Or at least he knows some high end cartel stuff went on at the border. Walt, however, knows nothing. In fact, if Walt hadn’t told Saul about Skyler finding out, and Saul hadn’t been worried enough (despite all his “She’s bluffing” and “paging Dr. Phil, my daddy’s a drug dealer and my mommy turned him in”) to put Mike on the “wife problem,” Walt would have gotten an axe to the head. All it took was a “POLLOS” text to stop The Cousins. Oh and how great was it to see Tio back?

So much is brewing. Skyler and Walt’s marriage. Gus trying to get Walt back to cooking. Saul wanting it even more. Walt’s moral quandaries about who he is, Jesse’s acceptance of who he is, Ted, The Cousins in pursuit of Walter White.