Well, this sure is one drama-filled hour of television.

Walter, Jesse and Hank all face some big decisions in this episode. A lot of it is about loyalty, and trying to do the right thing and deciding what they value most.

First of all, though, poor Gale. Gale is just so earnest, so hopeful, so ass-kissy but well-meaning. Gale dressing more like Walt is the perfect detail. It shows so much about his character, and about the power dynamic. Walt is in charge, Gale is the supplicant. But it annoys Walt. And I totally get that. Gale just has to top it off with “This could be the start of a beautiful friendship.” Oh it’s just too much for Walt, who needs to find a way to appease Jesse, as a way to appease Skyler. I don’t think Gale actually messed up the batch. He’s too meticulous, too ready to attune the lab setup, and himself, to Walt’s every whim, that I just don’t believe he screwed up the temperature. Walt just wants to make him feel bad so that he can have an excuse to fire him. I think it’s one step more than that though. I think Gale is a little too smart for Walt. Making Gale feel like crap, like he turned a badge into ruined sludge, makes Walt feel better, the superior alpha chemist.

How great is that childhood scene with The Cousins and Tio? We get to see Tio TALK! Not in English of course, but it’s great to see Tio before he’s stroke-stricken. And there’s clearly some animosity between Tio and Gus, the “Chicken Man,” the “dirty South American.” Tio’s words.

One of the funniest things in the episode is that trucker guy talking about how all the women he knows who liked to be peed on come from warm climates. What?! I really love those Cousins though.

When Saul says, “there may come a time to talk options,” he means killing Jesse, no? “There’s no honor among thieves…except for us, of course.” I’m glad that Walt, who really for all intents and purposes, doesn’t need Jesse now, and has his wife begging him to find a way to get Jesse off of Hank’s case and could really see that all of this could blow up so easily, doesn’t consider it. In a way this whole episode is about honor among thieves.

Walt makes a pretty big decision here, hiring Jesse as his assistant, err, partner. There are a lot of moving piece he has to consider. Jesse has threatened to cook again and Saul has said it’s a “when, not if” situation as far as Jesse getting caught and Jesse has threatened to turn him in. Skyler has asked him to fix things and even though he says that Hank’s not family anymore, because of the divorce, he does still think of Hank that way. So Walt has to find a way to solve all of this, and what he comes up with, well, it’s not an easy sell. Gus won’t like it. Jesse rejects it at first. But it’s also gotta be a tough call for Walt. With Gale, Walt was making three million dollars in three months. We have seen how greedy Walt can be about money, how he kept pushing for more in the last season. And that pay gets cut in half when he brings Jesse in. So this decision has a cost for Walt. 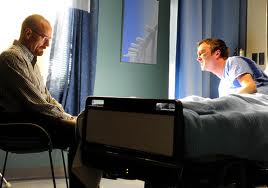 Jesse is at a crossroads here too. He’s full of righteous rage, refuses Walt’s offer at first, wants to haunt Hank’s crusty ass forever. It’s about time for Jesse to have this kind of explosion. Walt has taken a lot from Jesse in different ways. Jesse’s life has taken on a whole new level of darkness since Walt blackmailed him into cooking with him. He used to be sorta carefree, cooking with his chili p, hanging out with Emilio and Krazy-8, screwing the neighbor girl. And now here’s Jesse, with a dead girlfriend, a dead friend, an ocean of guilt for both of them. He’s been kidnapped, almost killed, harassed by the DEA, beaten up again and again. His outburst is a little overdue.

But Jesse decides to go back into business with Walt. It doesn’t make him happy–I think he’s feeling pretty trapped–as seen by the way he looks at that deep red frown face on the pain chart. Jesse looks so sad in that shot. But I think it goes back to what Jesse said to Walt a few episodes back, cooking is the one thing he’s good at. He did just almost get caught. Walt’s offering him a good deal. As angry as he is, it makes sense for him to get back into business with Walt.

I am SO GLAD to see that they’ll be working together again. Things just aren’t right in the world of BrBa without Jesse and Walt cooking together.

Hank has the biggest decision to face in this episode. I’ve heard Dean Norris say that the scene where he talks to Marie on the bed is one of his favorite scenes he’s ever done. Of course. Hank…how can you not love him here, or at least respect him? Marie, Merkert, they all want him to lie, to blame things on Jesse. Merkert has been putting up with a lot from Hank lately, and he’s still supporting him here. But Hank is the one guy who, after breaking bad, pulls back. Hank may be the one person who actually reflects on what he does. He doesn’t just accept. He doesn’t rationalize. He appraises himself honestly. No one on this show does that. And he does the right thing, even when it looks like it will cost him his career. He tells the truth and accepts the consequences.

Apparently, there was also a deleted scene (though it’s not on the DVD) where Hank calls 911 for Jesse after beating the crap out of him. I haven’t always liked Hank all that much, especially in the beginning, but he’s been accruing more layers as the show progresses and this episode highlights that so beautifully and also gives more layers to Hank and Marie’s marriage, how much they love each other. It’s great that even the person who could be seen as the “bad guy” in certain regards, the guy who’s on the hunt for the protagonist, has all these layers, and attributes to root for. Everything and everyone is in a grey area.

This turn may be good for Jesse. Surely Hank can’t keep coming after him now. It was pretty satisfying, early in the episode, when the guy reports that Jesse’s tox screen came back clean and he’s refusing pain meds.

But now Hank’s shot, one Cousin is surely dead (loooooove that shot, blood splattering on the camera, somehow grotesque and beautiful at once) and the other has been crushed.

Goodbye, scary awesome Cousins. Who might try to kill or undo Walter White next?

Next Episode: I See You