I’m sorry to break it to you if it’s news, but it’s true. 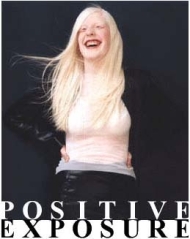 As I’ve mentioned on here many times before, I have albinism. This means I have no pigment and I have low vision but in all other aspects, I’m just like everyone else. Just like other albinos, other people who are blind and visually-impaired, othere people with other disabilities, or who may look different or be classified that way for any number of reasons.

People with albinism do all the things other people do. Well, except tan, I guess. But we live regular lives, unique to each individual. We go to school for all kinds of subjects, we play sports, work as copy-editors or fashion designers or teachers or web designers or scientists or dance teachers or classroom/academic teachers or musicians or roofers or fundraisers for nonprofit organizations or business owners or event planners or pediatric ICU nurses or…the list is endless. We date, have random hookups, get married, have kids. Some of us drive (I don’t). We travel around the country and the world, with others or by ourselves. We write, sing, dance, draw amazingly good cartoons, get politically involved. Some party and like to go to rock concerts. Some go hiking and camping and do all kinds of outdoor activities. You get the idea–the wide variety of activities, lifestyles and interests are the same as anyone else’s.

I was looking at Albinism News on Twitter, which is a great site run by someone(s) who’s really deft at handling the ignorant morons but my god, there’s a lot of them. I just couldn’t believe some of the comments that were on there, in just a 24-hour period. They ranged from someone posting that if they had an albino baby they would strangle it (exemplary parental material to be sure) to (several) people saying that albinos don’t really exist. The most common comment though, was people basically saying that albinos freak them out, that they wouldn’t date an albino, that albinos are really weird and spooky.

Somehow, when you are different, it just really draws out all the ignorant assholes. It’s really hard to comprehend (and it does kindle some inner suppressed but powerful rage) how people can be this unaware and this…prejudiced. When you judge someone as weird and freaky and undateable and nonexistent because of a facet of their appearance they have no control over, that’s prejudice. And it’s unfounded.

Someone suggested that albino organs be harvested for their magical powers. Oh also, this person specified that this applied to organs from white albinos, just making himself appear even more classy and intelligent. And just to clear up another question that was asked on there a lot, yes, people of all different races can have albinism. The gene can be more prevalent in certain populations but we come in all shapes, sizes, races, dispositions and so on.

So let’s look at this magical powers and special organs thing, which of course is as unfounded as all the other crap. It’s simple science, yo. Biochemistry. I just can’t help myself from wanting to give a little science lesson here, so here goes.

In our bodies, there are these enzyme pathways. It’s how our bodies do just about everything. Albinism is part of the phenylalanine breakdown pathway. Phenylalanine is an amino acid that gets broken down by an enzyme into tyrosine, another amino acid. From there tyrosine gets converted to other compounds (L-dopa, dopaquinone) and eventually melanin, and melanin is pigment.

Here’s a diagram of the pathway: 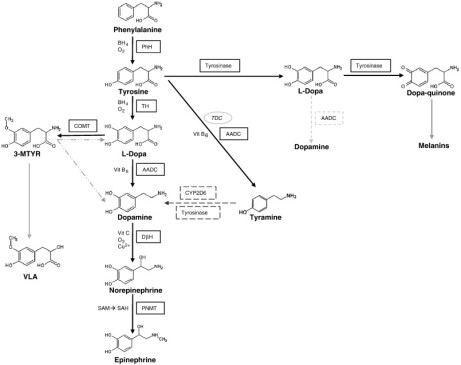 So what goes wrong in this pathway to lead to albinism? It’s simple, the enzyme tyrosinase, which you can see up there between tyrosine and L-Dopa, is inactive. This is due to the coding of the gene for tyrosinase, so it all boils down to genetics. If a similar genetic coding thing happened in the PhH enzyme between phenylalanine and tyrosine, you get phenylketonuria (PKU). People with PKU have to be especially careful about what they eat. Since phenylalanine can’t be converted to tyrosine, phenylalanine builds up and can be toxic. A similar thing happens with albinism, since tyrosine can’t be converted, it builds up (it’s like if a bridge were closed down and cars were piling up waiting to cross it) but tyrosine is excreted easily and is not toxic. And there are other syndromes and conditions that result from inactive enzymes at other points in the pathway, which will affect people in varying degrees. These genetic metabolism issues aren’t that uncommon.

Okay, maybe that doesn’t seem simple but like I said, I couldn’t help myself from giving a little impromptu science lesson. The major point is, it’s very cut and dry. There’s one enzyme in one pathway that doesn’t work, and so there is no melanin. Very straightforward, very scientific, very un-supernatural. Just enzymes and biochemistry, results from simple, straightforward, scientific genetics. No magic powers or curses or mystical blessings or past lives coming back to haunt you (a doctor actually said that to my parents when I was little, that I must’ve done something horrible in a past life) or fairy dust. It doesn’t make you psychic or come to you through lightning or science experiments gone wrong or whatever other crazy idea people want to throw out there. And yes, to answer a constant question on Twitter, yes, people with albinism die, just like everyone else.

People with albinism can’t have tattoos.

Like duh? Our skin is really pale, kinda prime for tattooing. Just like with any other group of people, there are albinos with tattoos and albinos without (I have two).

“Albinos are beings from a parallel universe with a different color gradient.”

M’kay, put the crackpipe down, yo.

“Albinos are actually vampires it all makes sense”

Okaaaay, put the Twilight crack down. I’m actually suddenly reminded of the first new episode of Beavis and Butthead, when they’re all making fun of Twilight and then trying to become vampires by letting a diseased homeless man bite them because this comment is at about that level of intelligence.

I know I’m coming off pretty bitchy here but sometimes when you’ve been dealing with this kind of crap all your life, you become a little bitchy about it.

Of course, there were the good posts too. Someone posted about Shaun Ross, a male model with albinism (totally hot), and posting things like “albinism is beautiful.” So amongst all the ignorant bullshit, there are these glimmers of light. By the way, if you need any convincing that albinism is beautiful, look no further than Positive Exposure.

But that’s just my particular brand of difference. We’re all different in some ways, and I’m sure we’ve all had to deal with ignorant morons because of it, in one way or another. So please, share your stories, triumphs, rebuttals, scars, whatever comes to mind.

5 thoughts on “When You Are Different, the World is Full of Ignorant Morons, Especially on Twitter”