It’s been awhile since a full Breaking Bad post, and I do plan to still do posts on the remaining episodes, just not on the schedule I originally thought. 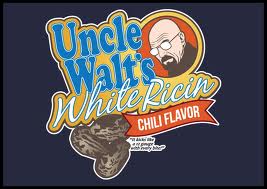 Beware: This post will contain mentions of things that happen in Season 2, Season 4, and last summer’s episodes from Season 5. Continue at your own risk.

I’ve been thinking a lot about the ricin on BrBa lately. Today, in a memoir writing class, my prof mentioned Chekhov’s gun, and it got me thinking about Walt and his ricin once again. For those that aren’t aware, Anton Chekhov was a Russian short story writer (and, I just learned from wiki, a physician). He said in several different instances and ways that if you plant a gun somewhere in your scene early on in a story, it must eventually go off, or there’s no reason to put it there in the first place.

The ricin poison in BrBa is called Chekhov’s Ricin because it’s been planted and no one knows how it will go off. Walt makes his first ricin in episode 201, to use on Tuco, an attempt that fails when Tuco won’t touch the ricin-laced meth because he thinks it has some chili p in it. Walt sprinkles ricin on Tuco’s food and that too fails when Tio starts ringing his bell like crazy, alerting Tuco that something is off, which leads him to almost kill Jesse.

In Season 4, Walt makes ricin again, this time in the superlab. He gives it to Jesse to use on Gus, which never works for a variety of reasons. In Season 5, Walt has this ricin back and hides it behind an electrical socket in Episode 502.

After that episode, I was in an online BrBa chat with Tim Goodman from the Hollywood Reporter (his BrBa post-episode chats rock) and everyone was asking him what he thought would happen with the ricin, and he said something along the lines of thinking the ricin wasn’t necessarily in play, and maybe it wouldn’t be used, precisely because everyone expected it. I thought he was crazy. That ricin hiding in that socket had to come out sometime. There’d been so much buildup.

Then, in the last episode of last summer, Episode 508, it does. Walt meets with Lydia, and she thinks he’ll try to kill her. When she gets up to walk away, he lifts his Heisenberg hat from the table and there underneath it is the vial. He had indeed planned to kill her with it, but she bargained for her life by orchestrating meth distribution in the Czech Republic. Walt put the ricin back in the socket and screwed the plate back over it. Chekhov’s gun brought out only to misfire once again.

And you know? Now I sorta feel the way Tim Goodman once did (though from later chats last summer, I don’t think he does anymore). It’s been brought out so many times, fans everywhere are theorizing who it will eventually kill. And now, I almost want it to not ever work, just to play against expectations. If the writers of the show simply forgot about it, that to me would be sloppy writing. But if they deliberately choose not to use it, in order to fuck with fans’ overwhelming conviction that it will come into play, that’d be kinda cool. I would be totally fine if that gun never goes off just because we’re all waiting for it to.

If it does end coming out from behind that socket, I hope it’s in a way that no one would guess or expect. Maybe it’ll be used to kill Walt? Maybe it’ll be ingested by someone by accident? Maybe Walt will try to use it again and somehow lose it? I just want however it comes up, or doesn’t, to be unexpected and surprising.