Jesse’s going off the rails and Walt’s getting his Heisenberg mojo back. And Jesse’s sobriety is over.

There is so much going on here it’s hard to know where to start. Guess I’ll mention a few visual details first. The neon green in some of the scenes with Wendy inside the Crystal Palace is ominous and haunting and beautiful. I like how the teaser ends with Jesse in a car and the first act opens on Walt in a car, and they’re in such different situations. During Mike’s “half measures” speech I couldn’t stop looking at how his ears are backlit.

Walt has another piece of the Gus empire puzzle–Gus is Mike’s boss too. It’s good to have Mike back. It’s been a few episodes. He’s another complex character. He’s so tough, so cold. He’s telling Walt that they may need to kill Jesse. And yet he gets all gooey over Holly and starts talking about his granddaughter. And Mike is there to warn Walt, off the record, and it’s implied Gus wouldn’t approve. Once again, Breaking Bad creates a “bad” character that has more layers, that has grey area. I don’t know if there are any characters that are all bad or all good. Well, Jr’s pretty good, despite his underage beer run and other such normal things.

Okay, though, maybe those two dealers don’t have any redeeming qualities. Gus thinks they do; they’re his trusted employees. Jesse gets a little crazy in this episode and you just want to yell at him to chill the f out and not ruin this good thing they’ve got going. But, you can also see where he’s coming from. His good friend was murdered. His new girlfriend’s young kid brother was used to do it. Jesse has a soft spot for kids and a loyalty to Combo, and a feeling of responsibility for putting Combo on that corner (at Walt’s command to expand territory). So what those guys did was horribly, horribly wrong and Jesse is right to feel righteous anger about it.

But the way he’s going about it? Well, maybe not. It’s sort of funny how Jesse and Walt have this conversation about murder with this music in the background, and the fireplace. Walt tries so hard to talk Jesse out of his plan to deliver ricin-laced burgers to the two dealers via Wendy. We haven’t thought about ricin since early in Season Two, but a lot of things come back in this episode: Wendy, Jr’s driving with both feet, the ricin, Combo and Tomas.

Back to the dinner scene though. Jesse is really convinced he has no other alternative and everything Walt says to Jesse only strengthens Jesse’s conviction that there is no other alternative. Walt says to Jesse that he is not a murderer. Then he says that he himself isn’t a murderer. It’s interesting because Jesse really isn’t. Jesse hasn’t killed anyone. But his taking on the persona of the bad guy, which has just gotten deeper and darker all season, maybe he believes he could be a murderer.

Walt on the other hand, is a murderer. Not that he takes pleasure in it but he’s done it. He’s made cold decisions, and decisions out of survival, but he has murdered. It goes back to the first episode in this season, when Walt says that he’s not a criminal. These men are both out of touch, and have been all season, in opposite direction.

Wendy’s not a murderer. She’s so palpably uncomfortable with Jesse’s plan. She’s as stubborn as Jesse. No matter what he says, even when he brings up her own son, she doesn’t budge and get fully on board with Jesse. 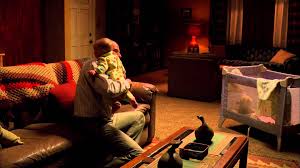 Mike’s speech is so chilling, perfectly fits the darkness of this part of the season and the series, but oddly enough, I think this shows a good side to Mike too, even in this horribly violent story, because Mike had righteous anger directed at the wife beater, just like Jesse has righteous anger directed at the dealers who shot Combo. It makes me feel that Mike is on the right side, somehow. And Mike takes his time with this speech, draws it out. Even though I’ve seen this now a few times, I was just as captivated and drawn in as the first time.

Walt has been managing people and situations and doing damage control all season and he’s really trying to manage this Jesse situation. His idea is to get Jesse arrested so he can cool off. Probably not a great idea to get your criminal associate put in jail. It can’t be good for anyone, but Walt’s trying. When that doesn’t work, he must go talk to Gus. When Mike and Victor pick Jesse up, you really think they’re going to kill him straight out.

In the meeting with Gus, just like last episode in the season with Skyler and Saul, Walter barely speaks. He’s trying to protect Jesse but he’s not speaking up for him. This is also the first time Jesse meets Gus. It’s clear that Gus has different ideas about how to deal with Jesse but is making a concession for Walt. As much as Jesse’s kinda being an asshole here, maybe rightfully so but still, I like that he stands up to Gus here. He says no, it’s not okay for these guys to use kids like this. If I were Jesse, I wouldn’t feel safe at all after this meeting.

Worse, he feels betrayed by Walt and then Walt drives him back to his car on Combo’s corner, and there’s Tomas. Walt is talking a bit too much as always, rationalizing, trying to make himself feel better. He does the same thing later when he’s trying to call Jesse. Walt will always find a way to make whatever he does seem right. And in some ways, he was trying to do right by Jesse.

And then those two dealers, they break their end of the bargain and kill Tomas. Andrea is so good in this scene, portraying all the grief and horror of what happened to her brother, bringing home how senseless this act is, how horrible. We’ve seen a lot of things on this show, and this kid isn’t exactly innocent, but murdering a kid is a whole new level, something way beyond the level of things Walt and co. would do. There’s a lot of red and blue in this scene–Brock was wearing blue, Andrea’s wearing red, and the flashing red and blue lights of the police car.

That Jeopardy! clip, of course, has a question (or rather answer) about Walt Whitman. 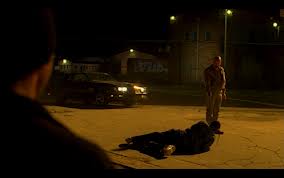 Once Walt sees the news report, he puts it all together. He knows exactly what Jesse will do. So he leaves the dinner table with barely any explanation. This is set up perfectly earlier in the episode when Walt had to negotiate for dinners with the family. That early scene set up the stakes, how important this is to Walt. He’s going to let Skyler be his Danny, much as he doesn’t want her involved (though again, she makes a really good argument for why they need a believable story), for some of these family dinners. So it’s not nothing when he walks away from that to go save Jesse.

The end of this episode is just…perfect. The darkness, the colors, how everything slows down from Jesse doing meth, to the walking, to the drawing of guns. Jesse doesn’t care, he has too much rage over what those dealers did that I don’t even think he cares if he dies. The framing shows just how overpowered he will be. All of these moments linger long and slow, just creating this wonderful burn. And then Heisenberg drives up all fast (great contrast to the slowness), and murders the two dealers. Walt is in fact a murderer.

But of course, as with everyone Walt has killed so far in the series, he has good reason. He’s saving Jesse’s life. But more than that, he’s saving Jesse’s soul. Walt has already given up so many pieces of his to be in this business, to survive, to make tough decisions, but Jesse hasn’t. Jesse, for a criminal, still has a fair amount of innocence. Walt’s not just saving Jesse from getting killed but also from becoming a killer. Walt has a lot of loyalty to Jesse.

This is NOT going to go over well with Gus. “Run,” Walt says, and Jesse better.

The next episode, OMG, just one of my absolute favorites, the only one I’ve just watched on repeat. So good, and this one perfectly sets it all up.