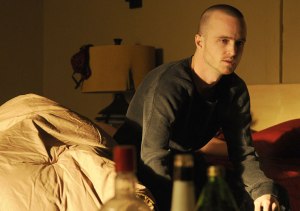 All right yo, things are starting to move and get more dramatic here. Every season it takes a few episodes to start moving forward more quickly after the huge dramas at the season change, and now is the time to bring in new twists and turn up the heat.

Walt and Skyler go public with the family and come clean, errr appear to come clean about Walt’s gambling winnings and about buying the carwash. Some people say that Walt is a careful man. Gus wouldn’t agree and neither would I, not really. Walt has a giant genius brain and is very good at getting out of situations, and he’s a master manipulator, but he doesn’t usually think too far ahead. Even Saul has chastised Walt in the past for not having plans for certain eventualities (RV). Sure, he likes a clean lab, but that’s not the same as being a careful man. I discussed this more in the post for 508 “Gliding Over All” because Walt does something that Mike might call “uncautious,” and I argued that though Walt is a meticulous chemist, he is not, at his core, terribly careful and has often left loose ends. Thinking far ahead is not Walter White’s strong points.

Skyler on the other hand? With every episode she is becoming even more of a perfect complement to Walt. An equal negotiator in the last episode, and a very careful planner in this one. She pays attention to details, and yes, some of it is overkill, but it’s exactly what Walt needs, someone to tend to all of that. This turn was perfect for Skyler because, we often forget, she was a fiction writer before all this. So she gets to get in her writing fix, and a fiction fix, and create this script to sell the story to Hank, Marie and Junior. So many great details, like that she incorporates quotes from other people at GA meetings. She’s so calculating when she says, “Really hit the cancer.”

One thing is clear now. Walt is not wishy-washy as he seemed last season, being all docile and preoccupied. He’s just as much under Gus’s thumb now as he was then, maybe more now that he has seen Gus slit Victor’s throat, and knows that Gus would kill him if he could. But Walt’s demeanor is stronger now, even when his circumstances don’t bear that out. Maybe it’s having Skyler back on his team. Maybe it’s having survived their attempt to kill him, maybe it’s a hardening after his recent murders, but Walt seems solidly in Heisenberg territory in his personality now, even when he’s being watched at every turn in the superlab.

He is not sorry, that’s crystal clear in his long scene with Skyler. That is profound, given his situation as a man who is being watched, called off, punched, insulted, who Gus will kill as soon as he can. Who probably does, or should, feel a fair amount of fear and days are numbered sorta thing. Like he says to Saul, he’s having a hard time keeping his family, Jesse and himself all safe. And still, he is not sorry. There’s something so cold to that. This is the time, if ever there was one, that could be ripe for Walt to have the sort of crisis of conscience that he did after the plane crash. He killed two dudes, he made Jesse, who he persuaded was not a murderer, kill for him, he watched another man murdered by his boss, all within a short span of time. This would be such a good time for self-reflection or a correcting of course, a why the hell did I start cooking meth come to Jesus moment, but Walt is having none of that. He stands by what he did, even as he has all this shit creek action swirling around him. So much of that early scene with Skyler was showing exactly this, Walt is proud. Walt is not ashamed. If given the chance to go back, I don’t think he’d make any changes. This is a different Walt this season.

And Walt does something in this episode that in my mind is one of the worst turns he takes, and that is his insensitivity to Jesse’s suffering. Walt has valid reason to question Jesse about Gale’s murder once he finds out Hank is investigating it, and perhaps some of his concern over it is out of protection for Jesse (though I think it’s probably more protection of himself) but he doesn’t even think of how asking Jesse to relive it might affect Jesse, or notice the pain on Jesse’s face as he keeps going.

I noticed something about the shot of Jesse’s face as Walt keeps talking and firing questions at him. It’s reminiscent of the shot of Gale’s face right before Jesse shoots him, except closer in. Gale talks at first, then quiets, squeezing his eyes shut before Jesse shoots. Jesse has a similar reaction, also squeezing his eyes shut as Walt shoots questions. It’s a powerful pairing because it amplifies how torturous this is for Jesse, how desperately he doesn’t want to relive this. But Walt’s oblivious to this.

I don’t think that he doesn’t care about Jesse–he clearly does when he lists Jesse among the people he’s trying to protect when he complains to Saul and he is worried when Jesse doesn’t show up, and more when he finds Jesse gone and his phone left behind–just that he’s insensitive to the intense psychic pain Jesse is living in on account of saving Walt’s life. Maybe it’s because Walt himself never suffered this sort of PTSD after his murders.

Jesse, who’s always been nonchalant about the new cameras in the lab, doesn’t notice that the camera is following him but Walt watches and catches on. The camera only follows Jesse, which makes Walt worry about him more.

Saul says that Walt can “buy a paddle, you know,” “a disappearer” so to speak. Walt’s not quite at that point, not now. But has Jesse been disappeared by someone else? If things get worse, Walt might want to keep this thought in his back pocket. For now he’ll just yell at the camera and ask where Jesse is.

Jesse is spiraling even deeper into his post-murder depression and numbness. Two things demonstrate this succinctly: he doesn’t care that all his money is gone, like, at all, and when he pulls that girl up and takes her to his room, he doesn’t seem interested in trying to do her or even try to make out, just sits there playing video games without talking, like she’s just there so he’s not alone. Jesse’s still pretty catatonic in his waking life. I don’t know, it seems to me like he’s sinking deeper into this depressed state instead of it abating with time. 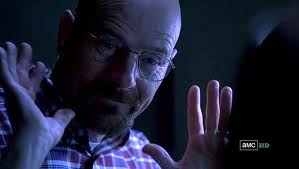 Hank though, he may be in just a tad of a better state of mind than last we saw him. Maybe it’s the face he puts on for company, or maybe it’s that he’s gotten out of bed finally. It doesn’t seem he has anything to pursue with Gale’s Lab Notes, since his “Heisenberg” already got got. The only remaining mystery was who the mysterious W.W. was, and the other W.W. clears that right up for Hank, Walt Whitman. That wonderful poem comes back. Gale’s notebook is…unlike any chemist’s lab notebook I’ve ever seen and so perfectly Gale. I think that on my first viewing of the series, I came to appreciate Gale more after his death. I was suspicious of his character at first, but now I look at him and I just love Gale. But my favorite line of description of him hasn’t come up yet.

Want to compare Gale’s Lab Notes (sorry this link may be defunct but I can’t tell if it’s just my computer) with those of a real-life synthetic chemist who made (and tried) lots of drugs? Just click the links above. This is what I was alluding to in my last post, and I just couldn’t help myself from posting it.

What a chilling and kinda funny scene when Hank says, “W.W., I mean who do you figure that is? Woodrow Wilson? Willy Wonka? Walter White?” And the best part? Walt’s little chuckle as he puts up his hands. I’m not sure why but I find it sort of hysterical that Gale dedicates his lab notebook with the mother of all methamphetamine syntheses to Walt Whitman, and writes “my star, my perfect silence.” Like, what? As Walt says, “he sounds…unique.” Gale, the lovable oddball outlaw.

Sorry for that little detour. You know the chemist in me can’t help nerding out on this stuff. In fact, just seeing drawings of molecules in bond line as Hank flips through Gale’s notebook is somehow comforting. And Gale’s song–is that the CD that was sitting by Gale’s teapot? It’s so…Gale, just like his notebook.

Oh and the cartel is back. This means Gus has other problems aside from just Walt and Jesse, which could be good or could be very bad for the fate of our dynamic duo. It certainly wasn’t good for Mike’s ear.

I leave you with this, Gale’s karaoke performance, full, uncensored and posthumous. Watch it in good health.