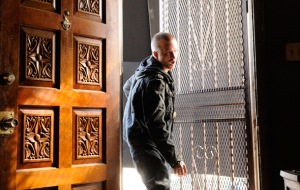 When I saw this episode for the first time, I wondered if there was a little Season Two action going on, because here we have a teaser that starts almost identical to the one a few episodes back, and they have a specific color palette, starting with the blue breath, just like the ones in Season Two had their black and white and pink bear palette. But these aren’t flashforwards, and there’s no hidden message in these episode names. It’s just the cartel, amping up their aggression towards Gus’s operation. There’s something very artistic about these openings, the cool blue of the inside of the refrigerated truck, the way the light comes in through the bullet holes. Always an eye for that sort of thing on this show, how to play with light and color to make scenes not only dramatic but visually interesting and artful.

Gus and Mike have bigger, or at least other problems aside from Walt and Jesse. This cartel business can’t be good. They want to talk and Gus is willing to arrange a meeting with them. In a way it gives another dimension to Gus, to see him dealing with other issues. To see that he may not always be in as much power as he appears to be in, that though we’ve often seen him as this cold, calculating man, this brutal killer, he has problems too, people who might antagonize him, threaten his operation. This was a great layer because if something threatens Gus’s business, it threatens Walt and Jesse indirectly, so it makes you want to root for Gus some, even as just a few episodes back we were all stranded in that superlab with Walt and Jesse, terrified of what Gus might do in his silent menace, then watched as he murdered Victor.

But nobody is ever all good or all bad on Breaking Bad, and Gus has always commanded respect with his meticulous criminal nature, but now, a little budding sympathy might also be inspired, just a smidge at this point.

This episode has a lot of reverberations. Things from previous episodes echo here, and things in this episode echo later. One thing that this episode echoes is when Skyler told Saul, when they were discussing how to motivate an “attitude adjustment” in Bogdan, that they didn’t want to do something that would get people deported. Now, unintentionally, that’s what Walt has done. Another echo is how Skyler keeps asking Walt if he’s in danger. Same thing when she first saw his black eye, but now that she’s putting more things together, figuring out who Gale is, she’s even more convinced that Walt, and the family, might be. Walt’s attempt to set things straight, “I am the one who knocks” and all that only makes it worse. Sure, Walt is a lethal man now, but aside from keeping himself and Jesse alive, which of course isn’t nothing, he’s been fairly powerless. It’s like he’s asserting power he doesn’t really have. Classic Walt.

Skyler asks Walt if the person who killed Gale Boetticher might one day want to do that to him, and Walt says he seriously doubts it. Oh, this show is just too much. 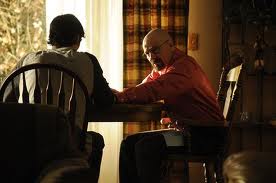 This episode continues the theme about Walt’s pride getting batted around, and this one seems to focus more specifically on attacking Walt’s manhood. Bogdan says that he hasn’t seen Walt work hard, “maybe not so much,” and then says that Walt has to be tough and if he can’t be tough maybe Skyler can step in. Skyler implies he’s in danger, and suggests a pity type story they could take to the cops, “Schoolteacher, cancer, desperate for money.” None of that makes Walt feel like a man. Jr implies that Walt is sick with the gambling addiction, that he’s powerless over it, a thought Walt can’t abide, the Honduran women at the laundry almost surely make a joke at his expense when he says, “I didn’t catch that one but I’m sure it was good,” (kinda reminded me of Hank in Juarez with the El Paso DEA), and Skyler makes him return the car.

“Someone needs to protect this family from the man who protects this family.” Walt is so impulsive and emotional sometimes, like buying Jr the car because he’s the father and he wanted to, not considering the consequences or considering the story that they are presenting to everyone around them. Walt has been fairly reckless lately, with his almost confession to Hank just before. And it’s no coincidence that he buys Jr the car after Jr’s whole thing about Walt having a disease, because Walt has to reestablish his power, that he is the one who chooses.

Might Walt, on some unconscious level, want to get caught? Of course he doesn’t, but he’s being careless lately, and I think he is afraid. This isn’t like last season when he had a lot to manage and keep tabs on, keep Gus happy, protect Jesse and so on. Back then, he and Gus were on pretty much the same page. Gus had more power but Gus wanted Walter around. Now, Gus would like to kill Walt, is separating him from his closest ally, watching his every movement. Walt’s in more danger than ever before.

Such a great time-lapse yo.

Skyler has a silent sequence at considering her options at Four Corners. Silent and powerful scene. It’s so significant that the coin doesn’t land in New Mexico, the Universe as it were, is giving her a different answer, Colorado, and she drags the coin back. She makes the choice to stay where she is, to go back home.

Jesse’s getting clean again, so that’s good. And he and Mike are developing a bond. Love when Mike goes, “What you don’t know about methheads, or, maybe you do…” Jesse proved himself during the setup but this time, nothing was stage, and Jesse handled himself well, he saved Mike a lot of time, used his knowledge of methheads to get the job done. And once again, we get a picture of some of the clients of the Walt/Jesse/Gus drug business, and how fucked up they are. That guy yelling Tucker is just so perfect, accusing Jesse of putting thoughts in his head. Two things in this scene just stand out as sooo awesome. One is that shovel camera shot, amazing. The other is when Tucker asks why Jesse is digging a hole and Jesse says, “You know why.”

And if you don’t know why he was digging a hole, click on the Tucker’s Hole link below for an in-depth explanation of this plot point.

So Jesse does good, and Gus says he sees things in people. Do you believe him? Jesse is the junkie that Gus told Walter he should never trust, twice, two seasons apart. Jesse shot “their boy,” and started all the drama between our guys and Gus with wanting to go after the dealers responsible for Combo’s death. So, does Gus really see something, or is he using Jesse as a pawn?

“It’s all about me!” Walt proclaims when he argues with Jesse outside the laundry. He correctly surmises the robbery was a setup and he’s so insulting to Jesse when he says it, so dismissive, like Jesse is useless. Jesse gets all Walt’s implications, that he’s a loser. Walt saying that Gus and co. can’t kill Jesse because he won’t stand for it doesn’t help. Jesse’s a bit gullible here but does he consider what Walt says, or is he too mad to? At least he realizes that all this pairing of him with Mike did start as baby-sitting, as forced sobriety. I do think in some ways Jesse’s getting smart and growing up some. Not super fast, but he’s more together, more self-possessed, more able to see most things as they are.

Walt still says, emphatically, that he stands by his choices. Although he’s always rationalized everything, I do think there were times where he may have been hesitant to say something like that, or might have been a little more wishy-washy as to whether he truly meant it. Not now. There’s a fascinating disconnect going on between Walt’s picture of himself and his circumstances.

Walt wears a dark red shirt at the beginning of this episode (carried over from the previous one) and then gets into this peach color. It was really striking and looks good on Walt. This is pretty different, palette-wise for him. It seems to suggest strength and power, which is what Walt wants to believe of himself here.

Jesse and Walt and their loyalty to each other have cost Gus a great deal of grief, so it is any surprise that he’s separating them? Will their emotions and actions be pulled by his puppet strings? Was Skyler’s decision to come back home and continue to build the story with Walt a permanent one? Is Jesse still suffering over Gale?

Walt’s tirade is so memorable and somewhat delusional that I have to quote it here. “Who are you talking to right now? Who is it you think you see?…No, you clearly don’t know who you’re talking to, so let me clue you in. I am not in danger, Skyler, I am the danger. A guy opens his door and gets shot and you think that of me? No. I am the one who knocks.” It’s so complex in a way. It makes you want to cheer for Walt. It scares the crap out of Skyler and causes a rift when things were getting better between them. She leaves for a few days after this. And what Walt says is sotra true and untrue, simultaneously.