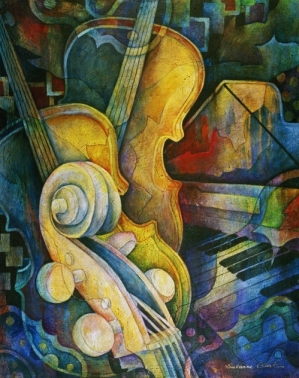 And at first, I tried to be good. All my dittos from class were filled out and filed neatly in my folders. I swept the floor even though I couldn’t see the dirt, going around the kitchen systematically until a dark pile formed in the epicenter. I scrubbed the bathroom sink and only complained silently to my favorite doll Jenny and my Care Bears in my room. I went to the Centerstream after school program with my seven-year-old brother Randy and didn’t cause any trouble.

One day early in the school year, my music class had a test. It wasn’t a real test, our teacher assured us. She just wanted to see what we already knew coming in. Up front she had about twenty-five big glossy photos of instruments lined up side by side, all seated in that little tray that’s supposed to hold chalk and erasers, and leaning back against the blackboard. The teacher told us to get out a piece of paper and number it one to twenty-six. Next to each number, we were supposed to write the name of the instrument in the matching picture.

I sat in my seat and looked hard at the row of pictures, squinting my eyes harder than usual. I didn’t have my monocular with me, or maybe I did and just couldn’t pull it out. So far, the other kids, though the same kids I’d been in school with since first grade, weren’t making fun of me as much this year. Maybe they were bored of asking me how many fingers they were holding up, or calling me grandma and ghost, screaming that if I came near them, they’d get my germs. Maybe they were used to me. I was supposed to be trying to make friends this year, and there was no way I was doing that with a monocular in hand.

I stared at the board some more but all the pictures looked almost the same to me, blobs of gold with slightly different patterns of shadows and extra shiny gold in slightly discernible different shapes. Some were a little less gold and more the golden honey of embossed wood. Other pictures, just one or two, were just blurs, the instruments too thin or small to make a blob I could see. I was pretty sure the pictures weren’t even in order and I definitely couldn’t see where the numbers were on the posters, much less read them

So I made it up. At different numbers I filled in names of instruments I had heard of–violin, viola, flute, guitar, tuba, trumpet, cello (I didn’t even know what a cello was supposed to look like)—at random numbers. I was last to turn mine in.

Of course, I failed.

I had never gotten an F before. It was unheard of, the kind of thing the real bad boys in my grade would do, or maybe girls like Erin C, who always got in trouble for saying swear words during school and recess and lunch. I put the test with its big red F in the folder for Mrs. Domaracki’s classes because I didn’t have a folder for music. I buried it between other worksheets. Mrs. Domaracki pulled me aside the day we got the music tests back. “You need to let your mother know about this,” she told me outside the door to the classroom.

“Yes,” I said. “I will.” But after I walked home with Randy, ate my snack and did my chores and went to my room to do homework, I still hadn’t told her. Instead I messed up my neat folders to bury my F even more. I lied and said I was done with my homework, and then went down to the basement to play with my Barbies. All the while, all I thought was please, please, please don’t ask to see my folder.

A few days later, Mom and Dad sat me down in the living room once Dad got home from work. “I got a call from your teacher,” Mom said. I wished I could fold up into the loveseat. “When were you going to say something?” she asked, her voice hard, creeping up to the shriek edge.

I just shrugged like I had no idea what she meant, just in case they were somehow sitting me down for something else.

“Emilia Rose Jordan,” Mom said, slow, not shrill, more a growl, like the engine of a revving truck. “Mrs. Domaracki told us about your music test.”

“Oh,” I said, sitting there, dumb. What could I really say? I folded as much as I could, my curled convex back reaching for the comfort of the plaid loveseat back but not quite touching it. “I tried—“ I said feebly, knowing I hadn’t really. I’d just sat there faking it. Mom cut me off anyway.

“She also told me,” Mom said, and now her voice was rising in volume and pitch and I wished I could crumple more, “that you promised her you would tell me about it.”

I tried Randy’s tactic, what he said after he failed a spelling test that he had really studied for, what had make Mom soften. “Maybe I’m just stupid,” I said in a small voice, willing her with all my might to feel sorry for me.

“That’s ridiculous,” Mom yelled. “You knew what you were doing!”

“That is, of course, two warnings for today.” Dad said, his calm, almost cheery voice almost scarier than Mom’s high-pitched one. Anytime any of us kids did anything wrong, we got a warning. If we got two in one day, we had to go to bed at seven.

“No buts!” Mom said, her voice firm.. I started crying. Her voice rocketed to the stratosphere. “If you’re going to cry, go to your room where I don’t have to see it!” Her favorite sentence, a mantra for my childhood.

I ran upstairs. I slammed my door, knowing it might get me in worse trouble. I couldn’t go silently like Randy. I wrote in my journal that I hated Mom and Mrs. Domaracki. I lay in bed and talked to my Care Bears in my head, pleading my case, and curled up on Jenny. Then I got out a book and read until I was too tired to be mad, too tired to tense with fear every time I heard Mom’s footsteps in sharp staccato in the hallway. I turned off my light and slept.

Next segment of this piece: Mystery Worlds