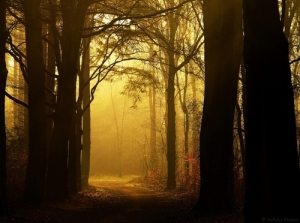 At every indiscretion—a not perfect grade on a test, talking in class when I wasn’t supposed to, not coming in from the playground in a timely manner after recess, not doing my homework completely or on time (a bad habit I’d quickly slid back into), reading during lunch instead of socializing with kids who made fun of me—Mrs. Domaracki called my mom. Even if it was just one thing in a day, it always counted for two warnings.

Night after night, several nights a week, I was sent to bed at seven. I lay in bed, watching the sky still light out outside my windows. Sometimes I’d stare at the tree out my east-facing window by my bed. Or stand at the south-facing window across the room with no big trees outside it but way more sky. I listened to the fire siren as its moan ebbed and flowed. In my head, I talked to my Care Bears on the white shelves near the south-facing window, telling them why it, whatever it was that day, wasn’t my fault. Sometimes they believed me. Sometimes they sided with Mom and Mrs. Domaracki.

I stayed up reading Baby-Sitters Club, Nancy Drew, Sweet Valley Twins, Goosebumps, Judy Blume, mysteries, books about girls who got made fun of, science books about outer space, never the books I was supposed to read for school. Or I did math problems in my head, going over times tables, finding patterns in the red numbers on my large print clock. I stayed up until I was too tired or too absorbed in another scary world to be terrified of falling asleep.

My best friend Maya and I wanted to find a secret passage. I had seen a real one once on a girl scout trip to some building that had been part of the Underground Railroad, but we wanted to find a real one. Especially at my house. She came over and we tapped the walls, listening for hollow sounds the way people did in all the mystery books I read. We recorded the results in a mystery notebook.

We played Barbies at her house. We played Barbies at mine, when we weren’t tapping my bedroom walls listening for hollow sounds. My Barbies had their own ongoing story, so when Lisa and I played together, I put my story on hold and played the one we made up together. After she went home, I went back to my story—always some variation of fucked-up families where fathers and mothers plotted to kill their own children and the newer, younger Barbies with chopped up hair tried to outsmart, outrun and outlive them.

We still played Outer Space sometimes, mostly at recess, meaning I called her Mercury and she called me Jupiter, but not as much as last year. We were on a mission to find a mystery. I wished Maya was in my class. If she was, Mrs. Domaracki might be more bearable.

Next Segment in this piece: Bathroom Jungle Gym

5 thoughts on “Mystery Worlds – Truth, Lies and the Wicked Witch 3”