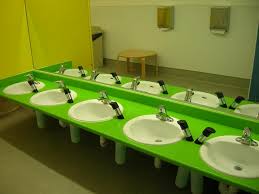 I started asking to go to the bathroom way too often in Mrs. Domaracki’s class, especially when she was about to check homework and I hadn’t done it. It wasn’t a good plan—she always checked mine when I got back—but it delayed things a bit. I got a good sense of when she was as about to check, raised my had and then wandered slowly to the girls bathroom with its pale green walls and three stalls with low walls. I sat on the toilet and read a chapter in a book or thought up what I wanted to write in my next “book “ about secret passages and baby-sitters. Or I did math problems or recited in my mind facts about the Solar System until I couldn’t anymore because it had been more than five minutes and I had to scurry back to class.

A few times I wasn’t alone in there. One time, there were three other girls. They were bigger than me, probably fifth graders. They didn’t sit on the toilet and think. They climbed on the stall walls and looked over and said, “Boo!” to each other. They locked the doors and slithered out under the stall doors. I was quiet in my stall and a girl’s head and upper body appeared over one of the sides. “Sorry,” she said when she realized I wasn’t one of her friends, that they weren’t alone. She giggled and the three of them left.

I saw them a few more times before I started to imagine the bathroom as my jungle gym like these girls did. One time, when I was trying to get out of getting my homework checked, I went to the bathroom as usual. I sat on the toilet and thought about my latest story, trying to invent exotic last names for my characters. But my mind drifted as I listened to the silence around me. I was alone and no one was coming. I climbed to standing on the toilet. Then I stepped onto the toilet paper dispenser and grabbed onto the top of the low wall that separated the stalls. I looked over the other stall, same as mine, and then hoisted myself onto the top of the wall, turned my body around and climbed down into the other stall. Then I locked the door, got on my stomach and slithered out on my stomach under the stall door like I had watched the fifth graders do. It made me oddly happy to think that the next person who came in would have to climb or slither to get into the two stalls I’d been in that day, since they were both locked from the inside.

Once my whole body was through, I lifted my stomach and got on my hands and knees, then stood up. And then I saw Mrs. Domaracki in the entrance of the bathroom, staring at me.

Next Segment in this Piece: Caught in the Act