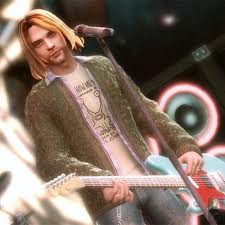 It is just impossible to imagine that Kurt Cobain has been dead twenty years today. And Layne Staley twelve. A day heavy with sadness to be sure.

I wasn’t sure if I would feel much of anything about today–it’s been so long now–and wasn’t thinking about it too much this morning. I got up, went to my computer, and did some heavy editing to the last section of the second chapter of Moonchild. It’s been slow going and the editing process has been more like a complete overhaul. I’m keeping the bones of the story, but reworking so much of it that it hardly seems like the same manuscript sometimes. So, editing the last five or six pages of the chapter took two or three hours.

Then I went back to an earlier part of the chapter to add in the one part I knew needed to be in the chapter but wasn’t yet, something that occurred to me at the AWP conference as an important aspect to the story I’m telling–something about loving a genre of music that was dying. I started to write that paragraph, about what that music had meant to me, and then suddenly I was on the internet instead of writing. The first cyber destination was a music-related forum that I’ve been part of (with varying degrees of participation) for many years. Someone there had posted a video of “Oh Me” from the Nirvana MTV Unplugged show. From there, I found this behind-the-scenes video about the Unplugged performance:

And that led me to “About A Son”

It brought back memories. It’s been almost two decades since I read it but I recognized a lot of Kurt’s quotes in “About a Son” as being from Come As You Are, the book by Michael Azzerad that was published before Kurt died. The music, too, brought back images and old feelings from the mid-90s. I remember hanging out with my brother and our neighbors and listening to Nirvana, collecting all these rare and import CDs with random recordings of Nirvana covering “The End” by the Doors, or “Baba O’Riley” by the Who, or unreleased songs that weren’t on most of the B-side compilations, collecting posters, writing lyrics in chalk on the driveway, practicing writing “Nirvana” by hand in the font that was used on all their albums, taping videos off MTV, reading Rolling Stone articles and Come As You Are.

Mostly, I remembered listening to the albums, the songs, over and over. Even though I don’t listen to Nirvana as often anymore, but I still remember every word and every note, even on the rarest songs. No band has ever meant more to me, and I doubt any band ever will. Nirvana was my first musical love.

So, I went back to writing my paragraph and got a few lines into it when I started writing about Alice in Chains and Layne Staley, who also died on this day, twelve years ago. The chapter I was writing took place in 1999 and I remember what it was like then, how AIC hadn’t toured in forever, Jerry Cantrell had done some solo stuff, there was a box set coming out (Music Bank) with two new tracks but aside from that, Layne seemed to fallen off the face of music. Every time an Alice in Chains song came on the radio, I was afraid that what would come next would be some DJ announcing that Layne was dead. I worried that for years, and one day, it was true (though I didn’t find out via the radio).

I remember that Saturday morning so clearly. I was living in Flagstaff, and I’d just gone with some friends, Laura and Stephanie, on a spontaneous day trip to Sedona that Friday before. I woke up and I went to the aforementioned music forum, and the thread on top was “Layne Staley, dead at 34.” I had been expecting it to happen for years, but it didn’t feel real. 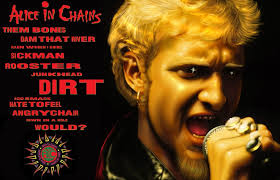 Though Nirvana was my first music love, Layne’s death affected me more. I was in seventh grade when Kurt died, and I hadn’t yet found Nirvana. I remember that pretty clearly too, I went to school one day and all I gathered from all the conversations I heard was “Nirvana died.” I was pretty sheltered, pop-culture wise, so I had no idea what this meant or who Nirvana were. I figured out that it was a music artist, but based on the name, I guessed that it was a girl. My friend Sarah had to clue me in. Then a few months later, I got into rock music, and so I went into already knowing Kurt was dead.

But with Layne, that was different for me. I had been a fan for years and his death really affected me big time. I felt lost. I remember going into the student lounge across the hall from my dorm apartment and writing the words to Temple of the Dog’s “Say Hello 2 Heaven” on a whiteboard and dedicating it to Layne. My roommates thought I was nuts, and didn’t even really know who Layne was, which only made me sadder. It was somehow this loss that felt intensely personal but was of course completely impersonal. I had never known the guy, but his music was part of me. His voice, the grit in it, the rawness, spoke to me, the raw grit in my own life. My roommates talked, a bit glibly–they weren’t big fans–about the death of Aaliyah, the R&B singer, which happened around the same time, and I felt like I had lost a close friend, someone who’d helped me survive growing up, and the grief was real.

About a week after he died, I went on a walk with my discman, into the wooded area of campus and I laid down in the dirt under big thick pine trees, listened to Above by Mad Season, let Layne’s voice take over me, and cried. And then I went back to my apartment dorm room. And I started making some serious changes in my life.

So here I was, trying to write this one paragraph but getting sidetracked thinking about all this, looking up articles about Layne, reliving that April, watching Nirvana videos, feeling sad and tired, and crying. So much for thinking too much time had passed for today to have much of an effect.

Kurt and Layne, two of the most beautiful, talented, raw voices of my music generation, and my life would not be the same without either of them.

Guess I’d better get back to writing that paragraph. But first, here are some more videos of Kurt and Layne.