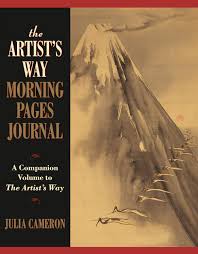 In The Artist’s Way, aka AW, a book I’m blogging about weekly, one of the first thing that the author, Julia Cameron, introduces is the practice of Morning Pages. As far as I know, this is also true for subsequent spin-offs and sequels. Morning Pages are the cornerstone of all her work on discovering, recovering, and reconnecting with creativity.

The morning part of it is to clear your head, dump out all your little thoughts and worries and random tidbits floating in your head that otherwise could nag at you for the rest of the day. And morning because maybe when we’re still groggy, there’s less self-censorship. That’s part of the privacy aspect, that they’re never to be shown to anyone because once they are, the other person’s judgements come in, and so do your own.

To that point, though this is probably a story for another day, I did once have a boyfriend who told me, drunk off his ass when we were in a fight, that he’d read mine and then made fun of me for things I’d written. Fun freakin’ times.

I started writing Morning Pages, or MPs, about half a year before I found AW, based on an interview but started them as evening pages, (I talked about this a bit in this post) and then once I found AW, I wrote them in earnest and in the mornings. I don’t think I still have all the old journals with them (though I hope I have more than I think I do) but I wrote them pretty regularly for probably about three-ish years, from ages 19-22, and that was a really tumultuous time in my life for so many reasons.

When I fell off the pattern of writing them, it was because I was spending so much time writing writing, like writing I hoped to publish someday, that I woke up and did that instead, and didn’t feel like I needed the MPs so much. And for awhile, at that point in my life, I’d landed somewhere, on Orcas Island, and there were some truly magical times to be had, which I wrote about somewhat in this post and this post and things were smoothish. Until they weren’t.

I think I still picked up the pages on and off during the ensuing while, but the first time I remember starting them up again seriously and daily was in the fall of 2006. I was in a horrible relationship situation with the guy who would eventually admit to reading my pages (and god knows what else) and I was keeping a secret for him that he’d asked me to keep, but whose keeping was eating me up inside and isolating me from everyone around me. Within a week of picking the pages back up, I wrote that I was profoundly unhappy in the relationship. So simple, but something I hadn’t admitted to myself, and nothing was ever the same afterward, even though he still lived with me for the next five or so months.

I stopped when he said he’d been reading them, for like two weeks, and then I said fuck it because I was drowning and I needed to write, and wrote them anyway, and didn’t even really care if he read them (though I’m sure there was some self-censorship going on there) and I continued to write them for awhile after. Until I didn’t.

Maybe I stopped when I was in India (lots of posts about that trip) though I did journal a lot while I was there. Maybe I stopped when I went back to school as pre-med. Maybe when I became a full-time student and started working at school too, and volunteering, and all the things. It’s funny how sometimes my memory of things like writing these pages in my early 20s is more vivid than it is for more recent years. I don’t know when or why I stopped, and there were still spurts in there, sporadically. But something had changed.

Morning Pages scared me. I thought of them as something that had blown up my life when I was in the shitty relationship with the guy who was making me keep a secret and reading my diary. Sometimes I felt like if I hadn’t picked the pages back up, which was something I did at the time out of sheer desperation, we could have gone on as we had been and that would’ve been easier.

Intellectually, I know that’s hogwash. I obviously wasn’t happy if it came bursting out of me within a week of taking up the pages, and the relationship was so obviously fucked up I couldn’t ignore it, but it’d been easier before I wrote that, before I faced it, before the thing was written down in pen.

Morning Pages have been like an anchor to my own truth, to what I think and feel, and often to what I don’t want to consciously acknowledge that I think and feel. The pages bring me uncomfortable truths and sometimes they’re truths that, once written, can’t be unwritten, or unknown to me anymore. So, I feel a certain amount of trepidation with them.

Even so, I took them up again this fall. I wasn’t in distress, I didn’t think, at the time. I just felt…disconnected, and though I’ve had off times, especially lately, I’ve been consistent-ish since. And once again, the pages, though not the pages alone, have kind of blown up my life. And I’m finding them harder than ever to write.

I’m going through a thing. I’ve hinted on here. I’ve hinted on my personal FB page. I’ve told some people. And I feel bad sort of “teasing” something and not spilling the beans, but right now I CAN’T write about it publicly, for so many reasons. I’m dying to, but I can’t.

What I’m going through now feels like the worst shit I’ve gone through as an adult. And there’s some tough competition for that. But the amount of fire-hot rage, and heart-rending grief and abject despair that I’ve been feeling relentlessly for months now is…a lot. Sometimes it’s so much it feels unspeakable.

I’m in the thick of it and it is real shit. I’m angry and grieving and terrified basically every waking moment. I distract myself with projects, and even with writing here, and the relief is nice, but I’m getting nowhere on making progress on what matters. I’ve been spinning my wheels in absolute quicksand for months now. And I’m exhausted by all of it and annoyed by fucking everything all the time.

It makes the pages harder to write. Some days I just can’t. Sometimes when I do the rage and the anger and the despair are just too much. Sometimes I write them and find out I resent every freaking thing that ever once gave me hope or made me think things would be okay, including, specifically, The Artist’s Way itself. I write the pages and I feel what I really feel, and what I really feel feels like utter shit. I’m so angry I don’t feel like I can speak or breathe sometimes. I have less than zero patience for well-meaning people who want to cheer me up and I know that’s not fair or generous of heart and I feel bad about that but I’m also running so empty and have been for so long that sometimes I just…can’t, whatever the thing is that I should be doing or saying. I can’t.

I am not okay. I haven’t been okay for months. I hope to come out the other side of this, preferably, you know, like tomorrow, but without some sort of miracle (which I’m totally open to and wishing for), I’m still in the shit, in the thick of it. And I don’t want to be cheered up because honestly it just feels like being dismissed and not taken seriously and not listened to because this is serious fucking business. There are some people I just can’t even talk to right now because they need me to be cheerful and that just isn’t on the table. And it all makes me even angrier.

So yeah, writing the pages is hard right now because everything I feel feels like bile. Everything I feel is all rage and grief and despair and then more rage and more grief and more despair, and writing the pages connects me to how I feel. And yet I want to write them because they also anchor me, and I need some sort of anchor. Sometimes I write them and I get more lost, or more real with how lost I am, and sometimes I write them and they help me keep treading water.

Wow, this post got messy, and I didn’t mean for it to but I guess I couldn’t help spilling over some. Like a lot of people, I’m just trying to make it through the day, and sometimes absorbing and writing about all this pop culture stuff, and focusing on concrete goals, and getting excited about the craziness in the next season of The Bachelorette, or listening to the saddest Taylor Swift album help me do that. Sometimes Morning Pages do too and I feel like they help me immensely, and other times they leave me feeling totally paralyzed with all the bile-ish feelings.

I have no idea how to end this post. I feel like I should have some grand conclusion, or quip, or positive note to leave it on, and I don’t have any of that. All I can conclude is this: Morning Pages might blow up your life, and hopefully, probably, ultimately that’ll be a good thing, and they blow up your life because your life needed some blowing up. It’s like The Tower in tarot–a card which I got constantly at the start of all this–which is about things getting all shook up because that’s what you need, but feels like destruction as it topples.

Hopefully soon I can at least talk and write about it on here. The secrecy aspect of it blows goats, but not as much as the actual actuality of it all. Ugh.