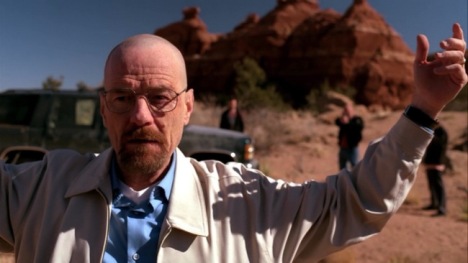 “Hank, why is there what looks like brains in our garbage can?”

ICE IN MY VEINS

WOW. Just…WOW. What an episode. Surprisingly, I had a strange sense of calm after last night’s episode. Much moreso than last week. Slept better too and I’ve been feeling calm all day. Maybe I have more bloodlust than I thought and just need a desert shootout every now and then. Or maybe it’s because this is the first episode in awhile that felt like it included just a smidge of release instead of all buildup, despite the excruciating cliffhanger. Maybe it’s that whole staying cool in a crisis thing, which I’ve definitely experienced before in real life, and the fallout will come later. The situation on this show is definitely a crisis. Threat Level Midnight, yo.

Anyway, on to the actual content of the episode. It’s hard to know where to start. This was one jam-packed hour. Almost stuck in too much awe to write about it. A calm awe, mind you, but still.