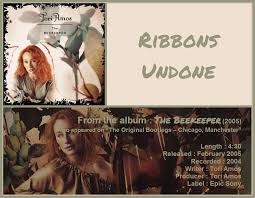 I’ll just preface this by saying that there are two sections of my book. The first is called Eclipses, with four chapters about childhood and adolescence before I left for college. These are not named after songs. The next section, Waxing Crescent, is the main body of the book, and I still think of the first chapter in this section as chapter 1. This section (the bulk of the book) is where lyric-as-title comes into play.

In this post I decided to go through my chapters that are named after song lyrics and say why I picked the lyric with the chapter, because I picked them all for such varied reasons.

Chapter One is titled “She’s A Girl Rising From A Shell” from the song “Ribbons Undone” by Tori Amos.

Some songs I picked because that’s what I was listening to at the time I’m writing about. This was not the case this time. I titled this chapter about leaving for college with a line from a song that I didn’t hear until six years after the fact.

END_OF_DOCUMENT_TOKEN_TO_BE_REPLACED

So, all my chapters (except for the first four that cover childhood), are named after song lyrics. In fact, I’ll just put the list of songs on here, to give an idea, and then I want to talk about the general motivations. Some songs come up more than once, (“Moonchild” by Chris Cornell, for example), different lyrics are used in each chapter. That song is the repeating refrain of the story, for sure. Anyway, for now, I’ll just give song title and artist.

Here’s the current table of contents: