Because this post is getting so complicated and involved, here’s a little Table of Contents so you can easily jump to any section you are interested in right off the bat. I’m going to keep updating as the season progresses, and promotional pics and teasers come out for each episode, so this will come in handy. 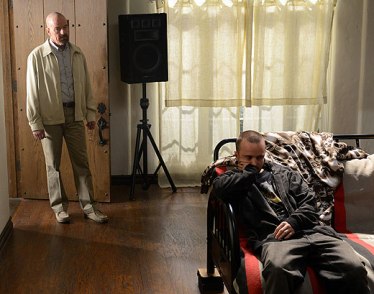 UPDATE SEPTEMBER 18: Pics, teaser and updated predictions for episode 515 “Granite State” added to the section below about that episode.

UPDATE SEPTEMBER 12: Pics and video teaser for episode 514 “Ozymandias” added to the section below about that episode. Updated predictions added for “Granite State”.

UPDATE SEPTEMBER 5: Pics and video teaser for episode 513 “To’hajiilee” added to the section below about that episode. New info added for “Granite State”.

Also, no idea in what episode, but Gretchen will be returning! You can read the article here. It mostly focuses on another upcoming project for actress Jessica Hecht but at the very beginning, it says that she was in Albuquerque filming for an appearance in the final season. What do you make of that? What episode might she appear in? My thought is that Walter’s crimes become public knowledge and Gretchen finds out what she was inadvertently helping to cover up so long ago. I just imagine that finding out the truth about Walt could bring her out of the woodwork. As could Walt’s funeral, but I’m leaning more towards the first guess. Thoughts???

UPDATE AUGUST 29: Pics and video teaser for episode 512 “Rabid Dog” added to the section below about that episode. New cast member listings at IMDB and updated predictions added for “To’hajiilee” and “Granite State”.

UPDATE AUGUST 14: Pics and video teaser for Episode 510 “Buried” added to the section below about that episode.

I’m also going to start posting my Betting Bad results after each episode airs. For others that are playing, please share your updates as well.

UPDATE AUGUST 7: A few more teeny, eensy little spoilers have leaked out about the first episode. Critics got advanced copies of 509 “Blood Money” and wrote reviews and tried not to say anything, but some couldn’t help giving a few things away. Even though these all relate to the first episode, I’m putting them down below in the Spoilers section so people who want to avoid them can, and those who want to know can read on.

UPDATE JULY 27: I did come across some actual spoilers (Comic-Con). The new info raises more questions than in answers, but I’m going to add it at the very bottom to be sensitive to those who don’t want any, even tiny, spoilers (and I’m usually one of those people but BrBa and this long wait is just killing my willpower).

BEGINNING OF ORIGINAL POST: In less than four weeks, the final episodes begin. It’s getting so close but it still feels like an eternity, all this waiting. So what to do in the meantime? Dig, dig, dig up every clue and try to figure out what it means. And there are several clues to find, so let’s put it all together and make some predictions, even though we know that Vince Gilligan and co. will no doubt prove us wrong and surprise us with things we never would’ve thought up. Still, mysteries are fun, so let’s at least try. I have gathered up a LOT of little tidbits for you all.