Wow, the Netflix description of this episode is…almost misleading. It’s all about Jimmy going to further lengths than he thought he would to help Mike. While this is technically true I suppose, it amounts to spilling a cup of coffee. And very little screen time for Jimmy.

This episode is all about Mike. After knowing him from the Breaking Bad Season Two finale onward throughout his time on that show, now in this prequel, we finally get Mike’s backstory.

It opens with Mike getting off a train in Albuquerque. Inside the train station (which is so fancy it took me quite awhile to figure out it was the train station), he meets Stacey, his daughter-in-law, who seems, well, not exactly thrilled to see him. Before leaving, Mike indicates without outright saying it that he needs to use the bathroom. He goes into the women’s room and gets a maxipad from the dispenser and then goes into the men’s room, where he reveals a bullet hole in his shoulder. He changes the dressing, using the maxipad to redress the wound.

Then Mike is at Stacey’s house, outside, playing with h is granddaughter Kaylee on the swings. Eventually, she goes inside while Mike and Stacey sit down and talk outside. She wants to know how long he’s staying. “For the duration,” he says. They talk a bit about Mattie, Mike’s son, Stacey’s husband, Kaylee’s dad, who died. Mike says he’s here now, he wants to help. He’s better than he was, he says. This is the first hint that Mike had quite the drinking problem after his son’s death.

END_OF_DOCUMENT_TOKEN_TO_BE_REPLACED 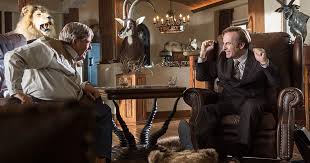 This episode starts something that continues through much of Better Call Saul, and that’s Jimmy and Mike having separate storylines. Sometimes, an episode will cut back and forth between them, that’s more typical, but in this one it’s more like a relay race, with Jimmy’s world getting the bulk of the airtime before he passes the baton onto Mike.

Unlike some others, this one doesn’t jump into a different timeline but picks up right where the last episode left off, with the five-dollar bill Chuck left on his neighbor’s driveway when he stole the newspaper. The neighbor has called the cops.

Two cops go to Chuck’s door and ask him to open up. “We know you’re there, you’re casting a shadow through the peephole.” Chuck says he’d rather not, that he has a condition, that he can’t go outside. They don’t believe him since he was just outside stealing his neighbor’s newspaper.

He starts to cite law on probable cause when one of the cops goes around to the other door and calls the other one over. They see all of Chuck’s camping stove fuel and they think he might be cooking meth (hello, Breaking Bad resonance) and go back to the front door. Chuck still refuses to open the door and says they can only come if they don’t bring any electronics. No cell phones, no flashlights and especially, especially, no tasers..

They break open his door, and go in, and taze him.

END_OF_DOCUMENT_TOKEN_TO_BE_REPLACED

As these teasers like to do, we once again take a little trip to another point in time. This time, the time is Jimmy’s old days in Cicero, IL. Or I should I say “Slippin’ Jimmy’s” old days? For the first time, we see a con start to finish from Jimmy’s younger years.

It starts with Jimmy a guy walking about at night, talking about picking up girls, and howling like werewolves. Which like shouldn’t actually be tried as a pickup line (howl?) because I think most responses would like, umm what? and a blank stare and then a retreat. But anyway, they’re walking and talking, and then they come across a wallet. And it’s full of cash. A thousand bucks or so. Looking at the ID in the wallet they see it belongs to a guy who they see passed out in the alley.

Jimmy tries to awaken the passed out guy who grunts, flips them the finger and mumbles some beautiful drunken nonsense poetry about how he’s going to fuck them up, go into McDonald’s and get them fired (what) and it just sounds like the babbling of one very drunk dude. He quickly passes out again.

Jimmy sees his watch and takes it off the passed out man and pockets it himself. His howling friend wants to see it and reluctantly Jimmy shows it, a Rolex. Jimmy pretends not to know what that is but the howler wants the watch, saying it’s worth way more than the money. He gives Jimmy the wallet full of cash, plus $580 of his own money and Jimmy gives him the watch. The howler thinks he has won the night.

END_OF_DOCUMENT_TOKEN_TO_BE_REPLACED 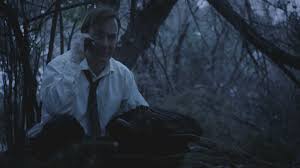 In a way, this feels like the first true Better Call Saul episode, since the first two had Tuco, such a memorable Breaking Bad character. In “Nacho” we’re fully entrenched in the BCS world.

Also, every time I sit down to watch this show to write a recap, I’m like, oh damn, this show is so freaking good. Sometimes, thinking about it ahead of time, it can feel like one more thing to schedule in but once I’m watching, I’m so absorbed. I really, really, really like BCS.

We start with a flashback to Chuck and Jimmy when they’re younger, though I couldn’t help thinking that Chuck’s younger makeup wasn’t so convincing. Jimmy’s been arrested for a “Chicago Sunroof” and is in danger of getting on the sex offender list because of it. In this teaser, it’s not revealed what a Chicago Sunroof is, but as a little tease of what’s to come if anyone’s watching for the first time, give it a couple episodes, and Jimmy will reveal it. Oh how he will.

At this point, Jimmy lives in Cicero, is in Cook County Jail, and Chuck had to come from Albuquerque to meet with him. They reveal that Jimmy hasn’t spoken to the family in five years, and that when he got arrested he called his mom, who has a soft spot for him and got Chuck to go see him. At first Chuck is not having any of it, but when Jimmy promises to do better and be better, he reconsiders.

END_OF_DOCUMENT_TOKEN_TO_BE_REPLACED 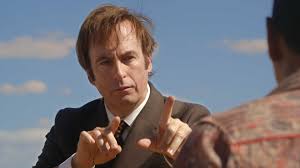 Wow, so, these first two episodes really feel like one two-part episode instead of two separate ones. I believe they aired that way back in the day when the show was premiering. Like many good two-part TV episodes, this one tells a self-contained story.

We rewind a bit from where the last episode left off but see it, this time, from Tuco’s perspective. Then Tuco’s grandma comes in with the twins, the one of them still pretending to be injured. They’re speaking really bad Spanish, asking for money, and then one of them makes the ultimate mistake by calling Tuco’s grandma a “biznatch.” This fuels Tuo’s rage for the rest of his time in the episode.

Tuco tries to get his abuelita upstairs watching her shows so he can take care of the twins. She comes down a couple times and sees a stain on the rug, which Tuco assures her is salsa, but we know has to be blood.

Jimmy comes to the door, which we saw from Jimmy’s perspective at the end of the last episode and now see from Tuco’s. Jimmy talks Tuco down from hurting the twins. Tuco’s about to release them…when they say that Jimmy put them up to it. Which, technically, he did. It just wasn’t supposed to be on Tuco’s grandma but Betsy Kettleman.

END_OF_DOCUMENT_TOKEN_TO_BE_REPLACED 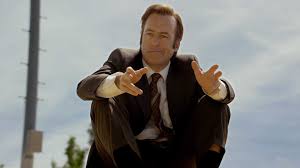 Well, it’s been awhile. Since I posted any recaps of anything in the Breaking Bad universe, and since I last watched the pilot.

I forgot how good it was, especially now that it’s been awhile since the most recent season (five) aired. How vivid this world is with its big Albuquerque skies and desert landscapes. How vibrant the storytelling.

Anyway, since I’m discussing the episode, there will be spoilers. And probably won’t be that interesting (or easy to follow) if you’ve never seen the episode. Which you can watch on Netflix.

It probably makes sense to start with a summary of the episode. I’m going to go in-depth on the summaries because from talking to people, I think some want to use these recaps as a way to refresh themselves on everything that happened, before the final season comes out, whenever that may be.