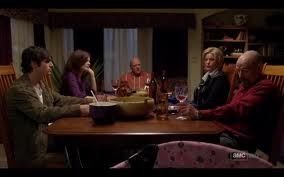 It’s been established in the past that Walt should probably not make speeches or take any sort of pain or pre-op meds, and this week we add two more items to the list of things Walter White should not do: drink heavily after his ego’s been insulted and drive a forklift.

The onslaught to Walt’s pride just keeps coming. Has Walt been successful at anything this season other than staying alive? It seems that every attempt at moving in any direction since then has been thwarted and put down in one way or another. He gets nowhere trying to save Jesse, and it turns out Jesse doesn’t even really need saving, he storms in to see Gus who turns out not to be there; he hooks up with Skyler then she decides, without checking with him, that he will move back in and when; then after all Walt goes through trying to save Jesse, Jesse comes back and sorta bosses Walt around; and then Jr drinks out of a Beneke mug and that just does Walt in. But if all that isn’t enough, Hank has to go on and on about what a genius meth chef Gale was.