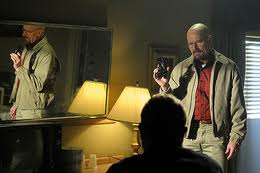 “You won, Walter,” Mike says. “You got the job. Learn to take yes for an answer.” These quotes will resonate, one at the end of this season, one in the next.

In the season premiere, Marie mentions to Hank that she really likes the new PT guy, and it’s easy to see why. The guy is encouraging but not overly so. He seems to really be helping not just with Hank’s body but also with his emotional state. Hank puts on a good face around the guy. So much so that Marie wants him to move in. Marie is really overdoing the cheeriness here, which understandably irritates Hank. Both of their dispositions–Marie’s over-the-top optimism (bordering on patronizing at times) and Hank’s gruffness and grouchiness–have amped up since the premiere. I still really feel for both of them.

They have a strong marriage, despite little blips here and there, but now Hank is in a place Marie has never seen him, that we the viewers have never seen him. His PT is going, but it’s so slow and he’s in so much pain and he has this new mineral obsession and there’s no DEA or detective work to speak of. He takes some of it out on Marie but he also tries to pull back some. I think that neither of them know what to do with this new Hank, with the fear that the old Hank, in body and in mind, may not return.