Okay, today’s the big day! These predictions were actually written a month or two ago over at the AMC BrBa forums with slight bits added and amended. I thought I’d share here before the new season starts. I’ll also be posting a discussion of each week’s episode after they air, and linking it up to other bloggers and TV critics who are doing the same. 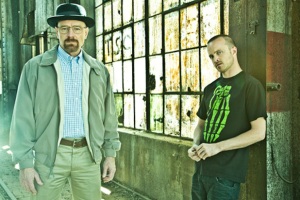 I think Walt’s cancer will come back, for a few reasons. The writers have hinted at it, as have the characters. Also, if it doesn’t, I would find it a little too miraculous for this show. That’s not to say that people don’t beat cancer or go against the odds, it’s just that what Walt had was pretty advanced and for the cancer to really be gone I would find a bit of a jump, believability-wise. It would be too magical. This isn’t Grey’s Anatomy (which I also love, and which has its own brand of darkness and unhappy endings, but also does have someone survive skin cancer with 5% odds), this is Breaking Bad, full of bleakness. Having him go into remission was a GREAT turn, for the show and for Walt, but I think that remission of his can only last for so long.

Personally, I would like that to be the way that Walt ultimately dies. Why? Two reasons. The first is there is some poetry in that b/c that’s how the real Heisenberg died. Also, I like that it takes control away from Walt. Anything else, anything that is a result of his actions or decisions in the drug biz, in a way he would have some control over, play a part in the decisions that led to it, etc, and control is very important to Walt, so I like the idea of him dying of cancer and not having any control or influence over it whatsoever. I have a feeling that the cancer returning (along with other things) may be part of the cliffhanger at the end of the first half of season 5.

I do think we will see some more of the backstory w/Gretchen and Elliot. It’s the real big past mystery that has yet to be revealed. And it keeps being hinted at as well. There’s everything said at Elliot’s party, all the accusations between Gretchen and Walt in “Peekaboo,” the scenes of the family in the past when they were buying the house and Walt was working at Sandia Labs and thinking they had nowhere to go but up. I think learning what happened will fill in some of Walt’s character as well. For example, was it something he did? Something he failed to do? Did G & E really pull the rug out from under him completely or did he have some part in it? Was he robbed of the future he wanted or did he somehow settle? And knowing that would allow us to see also how Walt interprets it. If it was more about something he did or failed to do, we could see that he is in denial about his responsibility over it when he lashes out at Gretchen (no big surprise there, it would be completely consistent w/his character). I just think having that murky part of the past illuminated would really flesh out Walt’s character more and I hope we get to see it.

I do not think Mike is going to avenge Gus’s death on Walt and Jesse. He seemed to have bonded w/Jesse, who really fought for Mike in Mexico and I think if anything, Jesse will try to check on him. I have recently seen some clips that make it seem like Mike is NOT on their side (well, I don’t want to spoil for anyone who doesn’t watch clips and teasers but I’ll just say he is threatening Walt) but I still think Mike will end up working with (for?) Walt and Jesse, not against them. Also, Mike is so pragmatic and Gus is dead so what else is he going to do? However, I could potentially see him being involved w/Madrigal (German last name). I do think Madrigal will play a role. I think that’s one of the great things, like behind each layer of the drug world in the show, there is always another. I could see a lot of potential directions to go with this but I def think Madrigal (hinted at since season 3) will become a powerful force in season 5.

Walt and Jesse will go back to cooking. As others pointed out, Walt doesn’t have so much cash left. In the time line of the show, he hadn’t been working for Gus very long before he killed him. They bought the carwash and then Skyler spent all that money on Ted, Walt also squandered some on that car that he ended up blowing up, and then there’s Hank’s medical treatment, and I think there were a few other huge expenses. So the $$$ situation is not so good at the White house these days.

I also predict some fallout in the Walt/Skyler relationship b/c she has now seen the Heisenberg side of Walt in a big way, and I don’t really know if it’s going to lead to them splitting up, but it will shake things up. This has clearly been shown in the clips to play a role in tonight’s episode but we don’t know how much.

And as so many others have already pointed out there are lots of different ways for different investigations to go, and lots of questions. What happened to Gus’s surveillance video feed? Will the woman at the nursing home who saw Walt say anything? Will Ted or his death be investigated? Where will Gus’s death lead Hank in his investigations? Soooo many good questions. I don’t have any strong feelings about where this will go but I don’t think Hank will link Walt to it all anytime real soon. If anything, maybe in next year’s part 2 of Season 5, or at the cliffhanger of this year’s part 1.

As NickCR pointed out in his predictions post, it would be cool to see more about Jesse’s family. But I don’t predict them playing a big role in the final season.

I have a prediction that I really, really hope is wrong. I think Jesse is going to die. I keep thinking about what Vince Gilligan had originally planned. Jesse was going to die in season 1 and it was going to invoke all this guilt in Walt and make him question his decision to go into the drug trade. I think that could still happen. They are much more bonded now. Something Bryan Cranston said recently makes me even more suspicious that this could happen, and part of it is just a feeling. Like I said, I really hope I’m wrong with this one.

Some think Jesse will end up killing Walt. I don’t. He was a hot mess for months after shooting Gale, who he barely knew and didn’t care about. I just don’t think he could kill Walt and live with himself.

So what do you think? Any predictions for the final season? Who do you think will live and who won’t? What side will Mike be on? Will Walt be alive when the show ends? Where will they have the next superlab or will they have to go small scale? How will they meet the “production schedule”? What will Hank figure out?