I just thought I’d give a quick update.

I originally started this blog to write about writing, and TV, and disability issues, and science, and music but I also struggle with blogging. Sometimes it feels more like a duty than something I enjoy doing. That’s especially true when I’m so busy with school and my job, and just trying to find time to write is a real challenge.

This year, I set a goal to write at least 4 days a week for at least an hour. That doesn’t add up to a lot, just 4 hours a week, and yet it’s still been difficult to find that time. Most weeks, I’ve met that goal, but there’ve been a few weeks I didn’t. There have been lots of weeks, like this last one, where I spent as much time writing as I would on a full-time job.

END_OF_DOCUMENT_TOKEN_TO_BE_REPLACED

It’s a mysterious thing. I think so many people are curious about it, even people who themselves are involved in the creative arts, because it’s not always concrete and logical (those aspects do come into play, of course). Sometimes it’s hard to know exactly where that first seed or flash or image or idea originated.

Sometimes you know. The idea for Total Eclipse of the Heart, which I wrote originally as a short story and am now having fun working into a screenplay, came to me pretty much fully-formed in a dream, including some of the dialogue. Actually in the dream I was taking a screenwriting class (which at that point in time I had never done in real life) and struggling with writers block, then came up with this idea for the story and in the dream I was reworking it and molding it. There were so many details, so many subplots and so much complexity for a story that came from a dream.

That has never happened before or since but it was pretty cool when it did. It kinda made me feel like I had to write the story.

END_OF_DOCUMENT_TOKEN_TO_BE_REPLACED 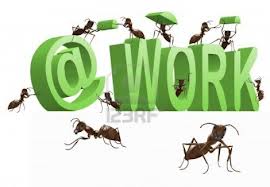 It’s a proven fact in my life: I get more done creatively when I’m working. I work at a YMCA camp, doing dishes and prep cook stuff. The days when I’m scheduled to go in, I get up, put in some hours on my book, take care of errands, and go in for my evening shift.

On the days that I don’t have work, I take naps, go on instant messenger, do nothing, tell myself I’ll get to my book later. I think the downtime is good for sure, and that my mind, heart, body and spirit need the rest and relaxation. I just find it a bit odd that I get my best creative work done when I’m also working.

END_OF_DOCUMENT_TOKEN_TO_BE_REPLACED

An Awesome Mind
i plant the seeds