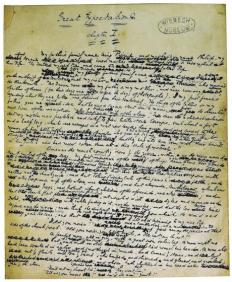 It was supposed to have something to do with humility and something to do with toughening up, posting this hot mess of a novel. It was supposed to be an exercise in posting something that I knew was really bad so that I’d feel less self-conscious about posting the work that I hope is passably good. I don’t know how well that worked, especially because I hemmed and hawed and cringed and winced every time I was going to hit “publish” on another post of another chapter of this shitty first novel.

I don’t think it desensitized me the way I thought it would. I found myself thinking all these thoughts like, what if people don’t realize this is old, and that I know it’s bad? What if people think I still write this way? Think this way? I gotta make it clear that I would’ve changed the ending to something far more cynical, and that I came up with the alternate, more cynical ending at eighteen. I better make it as obvious as possible that this shitty novel was written by a younger, lovesick teenage version of myself who didn’t know shit about writing and basically is so not me now. Not sure any of that helped with the ultimate goals of humility and toughening up.

But what I did start to think about is how much I learned as a writer by doing the work of writing the THSFN.

There are the obvious things. I learned, in a hands-on way, how to take an idea for a lengthier story and translate that idea into words on pages with chapters and a longer story arc. I learned to then take those pages and type them into the computer. And then to edit and revise those pages on the screen. And then to send that full-length work out to a reader, someone I didn’t know (my friend Steve, who went to a different school, asked his English teacher to read it and give me feedback, and she did). And then I learned to take that feedback and revise again.

All of that, you just have to learn by doing. All writers know it theoretically, but actually doing it was like developing, strengthening and working a new muscle set, and it made it easier to do the next time around. There is something to be said for finishing, for knowing you can finish, for following through and doing the work that comes after.

There were also less obvious lessons:

You don’t have to write the story in order. I knew the whole vague arc of the story in Affinity for Darkness, but some parts were clearer in my mind’s eye than others, or more compelling. Especially that last scene before the epilogue, the total lovesick teenage scene that I wanted to change at eighteen. At the time, that was the scene I saw most clearly, imagined it over and over. So I went ahead and wrote that first. Then other scenes became clearer and I wrote those. And then I filled in some in-between stuff, transitions, and so on. I don’t know if I ever would have finished if I’d forced myself to write the story in order.

To this day, I don’t write most things in order. In fact, the only thing I remember writing in chronological order in the last decade was a weird lyric personal essay called “A Tear that Hangs Inside My Soul Forever” (after a Jeff Buckley lyric from his song “Lover, You Should’ve Come Over”) that I intended from its conception to put out of order in the final product. So the one piece I wrote in chronological order was the one piece that was intended to be totally non-linear and non-chronological. Go figure.

When in darkness, write. My junior year of high school was an especially dark time for me. So many difficult things happened all at once and one after another to make it one shitty winter. My grandmother died, and I had been really close to her and had never really experienced death before. Two boys that I had really liked both rejected me in really mean and humiliating ways (one in September, the other in January or February). My brother and our neighbors, the same ones featured in Warding Off Eclipses with Sex and Music, who had up until then been my people, the friends I could talk to about everything and who shared music and made me feel like I wasn’t a complete alien freak, or if I was I wasn’t the only one, withdrew and some of them got all into hockey and didn’t even talk about music anymore. I felt really alone and sad and dark, the way seventeen-year-old outcasts do. But writing, that somehow moored me, kept me from totally losing myself or my mind. Put the darkness on the page.

And I’ve found since then that although it can be hard to really accept this on certain levels, it’s better to be going through a tough time and really feeling that darkness (or whatever the feeling is) and writing, than it is to be sliding over the feelings and not writing.

Staring off into space is productive. Sounds counter-intuitive, but it’s true. I remember writing the first, handwritten draft of Affinity for Darkness in one of those composition notebooks (its covered was a mottled red and white instead of the traditional black and white), sitting on the floor with my back against a wall in my bedroom.

For some reason, I didn’t sit on the bed or at my desk, but on the floor, against the wall opposite my windows. I would stare off into space, usually diagonally across the room toward the lamp by my bed. Staring off into space helped me play out the scenes clearly in my mind as I wrote them down. Sometimes I would do it for long stretches, but always in service to the story, to visualizing it specifically.

I wonder if staring off into space specifically serves more visual storytelling because nowadays I find myself doing that more with screenwriting than any other form of writing. I’ll sit there with my screenwriting program open and zone out, imagining even the smallest detail of a scene.

Good constructive criticism sparks recognition. Sure, sometimes there are things the author is completely unaware of, habits we don’t see. One of mine is that I don’t include enough about what characters look like (I think that could be linked to my legal blindness – as described here, faces are a challenge for me). But the bigger issues, the ones about how your story is told, you probably already know. And when someone points these out, there’s a certain spark of recognition, like yes, I know, so true.

This happened when my friend Steve handed me back my manuscript with his teacher’s comments (by the way, how awesome was his teacher, to go through and critique a complete manuscript for a complete stranger, in her spare time, for free?), one of the things she wrote about was that my characters’ reactions to the first death (Eve’s death) were unrealistic. Yes, I knew that, it was so true. Like I said, I hadn’t had much experience with death, and I knew that part of the novel was a problem. The reactions were too understated. The characters were just like “OMG EVE DIED” and then went back about their business, even though her death implied that one of them in the group was the killer. It was totally unrealistic and I knew that was one of the biggest problems with my manuscript.

Of course, knowing that didn’t mean I didn’t get all defensive and self-conscious and complain to Steve that I had already gone through and amped up the reactions to Eve’s death and how could his stupid (generous, thorough, giving) teacher not see that? But I knew she was right. And that’s important. As writers, we get all kinds of feedback, from all kinds of people with all kinds of biases. Some of it’s helpful. Some of it’s not. A lot of it is somewhere in the middle, maybe helpful but maybe pushing the piece into a direction that just doesn’t match your artistic vision. Maybe conventionally wise but not for you. Maybe great for you but not conventionally wise. You get the idea. It can be hard to sort it all out. But the good stuff, the feedback you most need to listen to, is the feedback that strikes that inner chord that says, yes, I know, so true.

So, the point is, write that totally horrible shitty first novel if you haven’t already. And if you have, look back and see what it taught you. You will grow from it. And growing probably means you will want to go back and change it somehow. And you can do that, if you want. Or you can move on to the next writing project, if you want. Projects that don’t ever see the light of day (or that only do so as some poorly conceived exercise in humility and toughening up) still matter, and may play key roles in your development as a writer.