I was away for a long time, and in that time, I had some writing news and updates that I’m overdue in sharing here.

One of those is that my piece “Living the Dream?” was published in Aerial, the art and literary magazine from OHSU’s School of Medicine.

Knowing that such a magazine existed was one of the many things that drew me to OHSU as a school. I wanted to be somewhere that valued writing and the arts along with all the science-y, clinical-y stuff I love. Since starting school there, I’ve found a good group of people, not only the people who run Aerial, but also a lot of people involved in narrative medicine, humanities in medicine, live storytelling, and so forth.

In fact, this piece came from the final assignment in a Narrative Medicine elective class I took last winter, taught by Dr. Elizabeth Lahti, who is THE narrative medicine, medical humanities person at OHSU. The assignment was to write “25 Things I Know About…” something. The assignment was based on the short story “25 Things I know About My Husband’s Mother” by Louise Aronson from her book A History of the Present Illness. We read this and other stories from this book in our class, and I highly recommend.

END_OF_DOCUMENT_TOKEN_TO_BE_REPLACED

I am albino, which means my skin and hair are paler than pale, and though I have partial vision, I’m legally blind. I grew up in a town where it seemed everyone worshiped at the same handful of churches and was white and voted Republican and wore the same clothes. I was white, but I was too white. I was an agnostic atheist, a bleeding heart, and I dressed like the grunge-rock musicians I admired. I didn’t even fit in with the delinquent kids, because my parents were too strict and my grades too good. I felt like the town freak.

Nothing emphasized my feelings of alienation like a school dance, where I’d sit at the back of the cafeteria and eat chips to numb myself. One time I tried to mingle, but a girl I’d ridden to the dance with told me to stop following her around like a puppy. I went back to the food table and tried to disappear.

END_OF_DOCUMENT_TOKEN_TO_BE_REPLACED 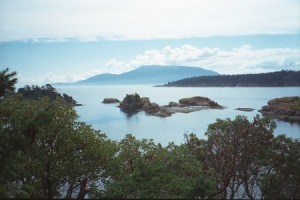 To get to Orcas Island in Northwest Washington, you have to take a ferry. Many of the 4,000 year-round residents come from the fringes of society—hippies, ex-hippies who settled down and had “indigo children,” drug addicts, recovering addicts, organic gurus who live off the grid and prepare for Peak Oil, retirees, healers, felons, millionaires, artists, and other assorted misfits and runaways. In 57 square miles there’s not one record store or regular concert venue, but music on Orcas permeates the atmosphere and is as soft around the edges as its characters.

At solstice parades, local ceremonies and the Farmer’s Market, performers range from saxophonists and a cappella groups to a World Fusion band called Orcatraz. In summer, there’s “Music in the Park” every Sunday night and “Brown Bag Concerts” on the green every Wednesday at noon. Both feature feel-good fare. There’s always reggae at the Oddfellows Hall, where local dances and holiday festivities happen. And now, for the second winter in a row, the island is having its own Orcas Idol contest.

END_OF_DOCUMENT_TOKEN_TO_BE_REPLACED

When I got home from Hawaii, I had a message about this acceptance on my machine. Trying to figure out which was better was a total toss-up – tropical paradise or publication is always a tough call.

Shark Reef is a local online literary journal, part of the Writers Guild on Lopez Island. I was especially excited that my piece made it in for two reasons.

The first is, I’ve heard that Shark Reef is difficult to get into, that they’re pretty choosy with what they publish, so it felt pretty good to get in.

END_OF_DOCUMENT_TOKEN_TO_BE_REPLACED

Note: This is a post from Jan 2008, before the actual issue of The Sun with my piece came out. You can read the piece on Parties here.

I’m so excited I can hardly type!

So, over this summer, I told myself I was going to send out a submission a week, and that plan lasted for, well, a week. The one thing I sent out was a submission to The Sun’s Readers Write section. There are topics listed in each issue, and I just picked the one with the closest deadline, which was “Parties” and did some freewriting, typed it, printed it and put it in the mail.

Just after returning from my trip, I got some certified mail from The Sun, saying my piece might be included, but they couldn’t be sure, as things do get cut or rearranged closer to publication, so I didn’t want to say anything in case it never happened.